Wednesday, March 3 Become a MAFVA member for as little as £16! Click Membership in menu below
You are at:Home»Members' Models»1/76th scale Battlegroup Diorama 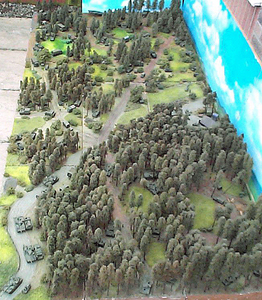 This diorama was started in the early 1980s.  After moving from Croydon back to South Wales as a Trading Standards Officer, I was put with Peter Orpin as my Trading Standards Assistant.  When you spend all day working together you see more of each other than you do of your own family and talk about everything under the sun in between visits to shops, pubs, petrol stations, or factories, to name just some of the places we used to visit.  Peter had recently left the 1st The Queens Dragoon Guards as a Chieftain tank driver, and so we hatched a plan for me to make a diorama of his tank Troop.  Over the years that expanded into a tank Squadron, and then into what was known at the time as an armour heavy Battlegroup. 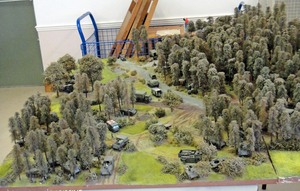 and 621 trees that were all hand-made by me.  At the time I was making master patterns for Gordon Brown of Cromwell Models and for Barry Wright of B W Models, which is how I was able to have a complete Infantry Company of FV432s, with a Battery of M109 self-propelled howitzers to name but a few.  Most of the Chieftain tanks are Airfix kits that have all been upgraded to later variants, and there are also a number of scratchbuilds on it such as a Stalwart UBRE (refueler), a Land Rover 1 ton, a CET, and a Centurion ARV.  As well as copies of my own master patterns such as the FV434 and the FV432 Mk.2/2.  All of the models on this diorama have been made by me, except for one.  I am particularly pleased to say that the Chieftain AVLB is on a long term loan from Tim Neate. 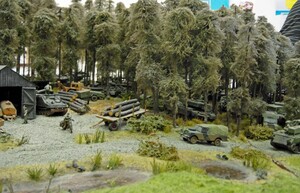 I should stress that (other than one day during a Scouts trip to Belgium where we went to Aachen for the day) I have never been to Germany.   One time I was working with my assistant Peter in Maesteg, and we went to Margam Forest which is nearby.   Peter pointed out to me which bits looked like the forests in Germany, and that is what I have used as the basis for this diorama.  One time I exhibited my layout at a show in the 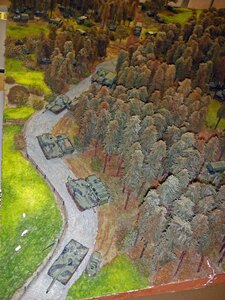 Royal Welsh Agricultural showground in Builth Wells, which isn’t far from Derring Lines in Brecon and the Sennybridge ranges.  At the show I spent quite a bit of time with a British Army Officer, who was convinced that I must have been in the Army to have made this.  He was quite disappointed when I told him that I was just a local government officer.

Another particularly memorable occasion with the Battlegroup, and again with much appreciated help from Tim Neate was when I displayed it at a Waterloo Day celebration by the Scots Dragoon Guards when they were based in Tidworth in the mid 1990s with Chieftain tanks that they were soon to change over to Challenger 1s.

It was just a one day show, but on the day before we attended their dress rehearsal where we could watch the whole of the Regiment drive down from a hill in front of us and then drive past us, with virtually empty seats around us.  On the day of the show I was absolutely amazed by the helpful hints and suggestions that I had from the Officers and men of the Scots DG.  I spent about two months after the show correcting the various things that I had wrong. 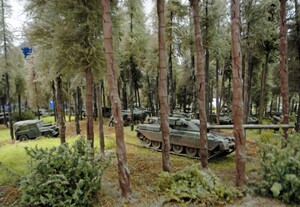 This whole thing has given me hundreds of hours of enjoyment and has encouraged me to make numerous master patterns so that I could have multiples of vehicles on the scene.  It has only been displayed at a few shows as it is such a huge thing to lug around.  But I did display it once at the War & Peace show in the model marquee, and another time at The MAFVA Nationals in Duxford one year. 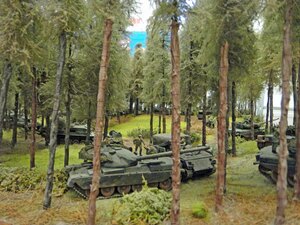 The top photo was taken on my patio, but all the other photos you see here were taken at our South Wales MAFVA Open Afternoon in 2011, which is the last time that I have displayed it.  It has since been over taken by my N gauge model railway layout.  As you can see, I obviously enjoy making great big ungainly things that are completely knackering to move around.  But if nothing else, they are most certainly unusual, and it’s all part of what for me is the absolutely brilliant hobby of military model making.