Sunday, July 3 Become a MAFVA member for as little as £16! Click Membership in menu below
You are at:Home»News»2019 IPMS/USA National Contest and Convention – Chattanooga 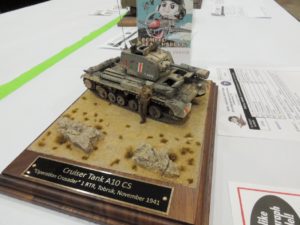 The 2019 IPMS/USA National Contest and Convention took place in Chattanooga, Tennessee, 7 August – 10 August and our buddy Mark Ford took the trip from Washington and sent us this report:

“The event was held in the convention center, downtown Chattanooga.  It is a large venue having ample space for the vendors, seminars and model display auditoriums.

The vendor room was large and well laid out.  I spent quite a bit of cash buying all sorts of items for future model projects.  The seminars covered a variety of subjects model related such as airbrush techniques, figure painting with acrylics and weathering military vehicles.

The model count in the contest, I’m told, was 3100.  Another 1500 models were on display and not in the competition.  I would estimate there were 500+ models in the Military Vehicles/Ordnance categories. Judging took place on Friday night with the winners being announced at the awards ceremony on Saturday night.  The category place winners were announced with the award set next to each model in the contest room before/during the ceremony.   Individual class winners were identified with a small plaque set next to them in the contest room for public viewing all day on Saturday.  I was fortunate to be rewarded with a 1st place for my French Panhard 165/175 armored car and a 1st place for my British Cruiser Tank A10 CS.  The A10 also was selected at the Best Military Vehicle in the class.  It was a very enjoyable time that I got to share with my good friend, Jim Mesko”.