Tuesday, July 27 Become a MAFVA member for as little as £16! Click Membership in menu below
You are at:Home»Featured»A Tale of Three Hawks – by Jim Mesko

Most of you will be familiar with the Squadron books written by JIm Mesko. What you may not know is that Jim is also an avid collector of old and rare military model kits and is an expert on the history of plastic modelling.

A Tale of Three Hawks by Jim Mesko
Back in the late 1950’s the HAWK (Homing All the Way Killer) missiles system was considered the state of the art low level and medium range air-to-ground. Today the system is still in use by 20 countries but has been retired by eight. During its lifetime over 40,000 were produced by the US and several other countries, and it has undergone numerous modifications to keep pace with technology. Its first deployment in combat was to Vietnam when two US Marine Corps batteries were deployed to help protect the important airfield at Da Nang. Since then it has seen combat in the Middle East with Israeli forces and during the Iraq invasion of Kuwait.
At the time three kits of the HAWK were issues in 1/40 and 1/32 scale (?) by Renwal, Adams and Revell. The old Renwal kit, produced in 1/32 scale in late 1950’s time frame was in their “Blueprint” series. In addition it was later reissued in a white box prior to Revell acquiring the molds. It was then reissued under the”History Makers” series and most recent as a limited edition kit.  The old Adams Company also issued their own version of the Hawk back in 1958 (see Figure Two), pre-dating the Revell issue by several years.

2. ADAMS 1/40 SCALE HAWK BATTERY
The Adams kit was part of a series of models designed and produced under both Adams and Revell, all in 1/40 scale. This series included the Adams 105mm gun, “Honest John Missile, 120mm  Anti-aircraft gun, M-40 Self-propelled gun, the LVT-(A)4, and the “Atomic Cannon”, in addition to the Hawk battery. Revell marketed the M-4 Sherman tank , the “155mm ” Long Tom gun and Tractor, the Jeep and Trailer, an M-20 Armored Car, and a G.I. Figure set. Both companies issued some kits as individual items, and both packaged two much sought after gift sets with a combination of kits from their respective lines. Eventually Adams and Revell parted ways, with Adams folding, while Revell added new military kits in the early 1960’s, using a different mold maker. This was especially obvious in the figures as both the early Adams and Revell figures were well animated and had sharp detail, while later figures had a softer, less defined shape in comparison. The Revell Hawk falls within this range of kits that included a T-34, M-56 “Scorpion”, 105mm Howitzer, and M-35 truck, all in 1/40 scale
As for the two 1/40 scale Hawks both kits came with the missile launcher and radar unit. However the Adams kit also featured a tracked carrier for the missiles (see Figure Three). In addition Adams also marketed a Cessna CH-41 helicopter as a missile carrier (see Figure Four), complete with two Hawk missiles under the rear fuselage. Given the CH-41’s limited lifting capability, it is unlikely that the helicopter was ever considered for this type of work though it does make for an interesting model.

4. ADAMS 1/40 SCALE CH-41 HELICOPTER
Neither kit is a copy of the other company’s model. That is very obvious to anyone who has looked at the kit breakdowns and assembly instructions. To claim that they are copies is completely false. In addition the difference in the molding detail is easy to see. Each builds into a nice replica and have working parts that are not too far off scale. All in all, for that time frame and information available, they are relatively accurate models.
As for the Renwal Hawk, Renwal did not list copyright information their kits back then, so an educated guess would be that the kit was made in the late 1950’s, though possibly a little later (see Figure Five). Years ago there was an excellent article in the IPMS Journal on how to update the kit, which the author claims has numerous inaccuracies that need to be corrected. The article is an excellent building outline if you want to update the kit to current standards. Scale wise it is claimed to be 1/32 but I have seen some claims that it is closer to 1/30. 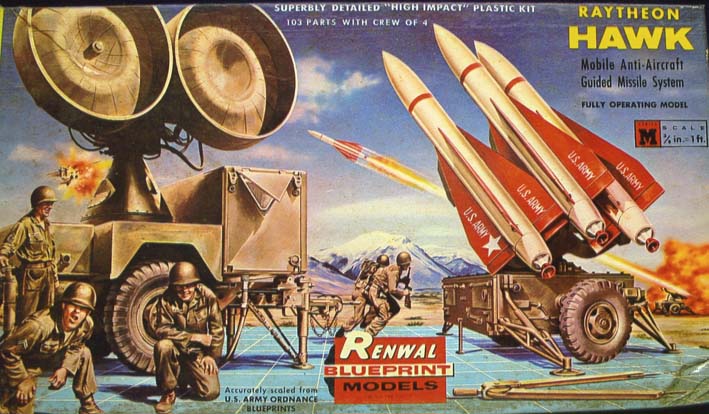 5. RENWAL 1/32 SCALE HAWK
As far as I know the Revell 1/40 scale Hawk was never reissued. The Adams kits has been available under a number of labels, including SNAP, UPC, and Life-Like, and possibly under Athearn, Crown and Marusan. Currently the molds are owned by Lindberg according to published accounts so it is possible they may once more see the light of day.
While not up to today’s standards, for their time these kits were inexpensive, relatively accurate and easy to assemble. And to a whole generation of young boys they opened up a fascinating hobby that many of have enjoyed right up to today.
Artillery old kits post war US Army
Share. Twitter Facebook Google+ Pinterest LinkedIn Tumblr Email