Tuesday, January 19 Become a MAFVA member for as little as £16! Click Membership in menu below
You are at:Home»Reviews»AFV PHOTOALBUM 3 PANTHER 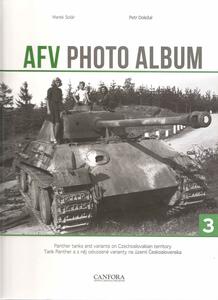 The photos speak for themselves in this third volume of the series devoted to the Panther tank. Text is limited to a few tables of data about the panzer divisions and Panther numbers in Czechoslovakia in 1945. The photos are mostly of abandoned Panthers in varying grades of destruction, scrapyards and on marooned tank trains. Most are later types but all Panther models are represented with some Jagdpanther and Bergepanther. There are a small number of other related AFVs. Fifteen pages of impressive artwork illustrate some of the camouflage schemes. The authors have done some remarkable detective work in identifying the vehicles and locations, often with few identity markers or in countryside with few distinguishing features, sometimes of the same vehicle(s) from unconnected sources in different time periods. A handful of photos of speeding Panthers capture the panic of the German units retreating from the Red Armies in those final weeks of fighting. Others are trophy photos of tanks surrounded by troops from the combatant armies, militia and partisans. Some Panther hulls have been recycled postwar for use as tractors. This is a remarkable collection of good quality photos from a wartime battleground that is less often featured in popular English language publications. Thanks to Canfora for the review sample.
John Ham.