Monday, January 25 Become a MAFVA member for as little as £16! Click Membership in menu below
You are at:Home»Reviews»IBG Scammell Pioneer 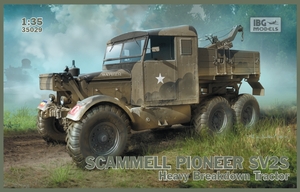 The Scammell Pioneer was a British 6×4 tractor used in the Second World War as recovery vehicle, artillery tractor and tank transporter. All Pioneers in British Army were equipped with a 102 hp Gardner 6 cylinder diesel engine, rear-wheels drive and a power winch. Introduced in 1935, the version R100 heavy artillery tractor was used in World War II to tow medium and heavy artillery. 980 Pioneers R100 were produced to the end of the war. From 1936 the British Army began to receive 43 Pioneers heavy recovery vehicles SV1S. Many of these SV1S and R100 vehicles were lost in France in June 1940, destroyed by the withdrawing troops or captured by the Germans. The version SV2S had a redesigned crane with greater lifting height and was introduced in 1938. Total of 1,975 SV2S were built. Delivery of a tank transporter began in 1937. This variant was equipped with a longer chassis for an extended cab to accommodate the tank crew. 459 of Scammels in this variant were produced.