Wednesday, May 12 Become a MAFVA member for as little as £16! Click Membership in menu below
You are at:Home»Reviews»Book review – German and Russian Tank Models 1939-1945 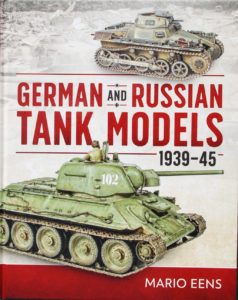 Title: German and Russian Tank Models 1939-1945
Author: Mario Eens
Publisher: Casemate Books
ISBN: 978-1-61200-735-9
Reviewed by Tankette editor Robin Buckland
“The author, Mario Eens, is one of the finest AFV modellers around, and I well remember his superb entries in the prestigious Euro Militaire competitions of several years ago. In this new book with Casemate Books he has put together 5 top class builds which are explained in detail, both from the build point of view as well as the painting and weathering.
The first build is a Panzer I Ausf A, a Dragon Models kit with a detailed interior. We have a detailed description of the build along with the painting and detailed weathering applied not only to the interior, but also the exterior surfaces. The main lesson in this one I though was just how to do the heavily worn/weathered finish of one of these little Panzers in service with the Afrika Korps in North Africa. The base coat of Panzer Grey was covered in new sand colour once in Africa, but this was a much lower quality and quickly became heavily worn, helped along by use and the abrasive effects of the sand it operated on. That is followed by an equally detailed account of building a Tamiya T-34/76, using the rounded ChTZ cast turret from 1943. A number of details are added to the model, including the use of Modelkasten tracks and the well used look of a plain green tank is nicely explained as to how each effect was achieved.
The next section returns to a German tank, but this time a 1/72 die-cast model of the late war Maus heavy tank. This is more about detailing and re-finishing a pre-built model and which shows not only how to do this, but that these techniques can equally be applied to small scale models as well as large. The fourth tank to be built is actually an SP gun, the chunky looking SU-152 and slightly different again as this is the Bronco Models 1/48 kit, with the addition of metal Friulmodel tracks. Again, a basic colour of Russian Green, but this time with a well worn winter white camouflage.
The final element to the book shows us how Mario went about painting a 1/35 figure of a Russian infantryman from Mig Productions plus scratch-building a base to display him on. Throughout the book, each build is heavily illustrated with top quality photos that illustrate each stage of the build and painting process that is being described. In particular I enjoy reading the many useful tips from a genuinely expert modellers who is happy to share his skills with the rest of us and this new book certainly does that.

Thanks to Casemate Books, who kindly provided my review copy”.