Wednesday, July 6 Become a MAFVA member for as little as £16! Click Membership in menu below
You are at:Home»Reviews»Publications»Book Review – German Tank Destroyers 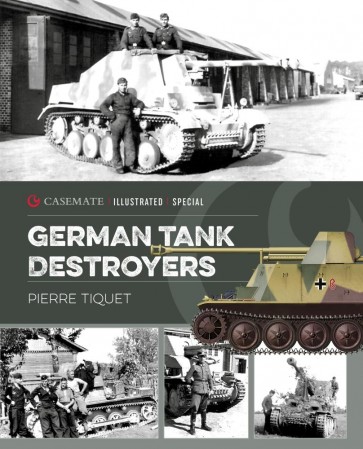 This is a concise history of the German WW2 tank destroyer with a lot of information packed into its relatively small format and supported by a very good selection of images and camouflage artwork.
Opening with a timeline sets the scene for the book and is followed by a generalised introduction to Panzerjager with the requirement to put the weapons on a tracked chassis and under armour.
The author approaches the development of the type chronologically, starting with the Czech 4.7cm PaK mounted on the PzKpfw 1 chassis which he refers to as the ‘Ente’ (Duck), not to be confused with the PanzerJager IV/l70, known as Guderian’s ‘Ente’. He then moves on the various Marder (Marten) designs, the Marder II (7.5cm PaK 40 on the PzKpfw II chassis), Marder II (second model) (PzKpfw II Ausf. D/E with Russian 76.2mm gun), Marder III first model (PzKpfw 38(t) mounting the Russian 76.2mm gun), Marder III Ausf. H (PzKpfw 38(t) with 75mm PaK 40) and Marder III Ausf. M.
Unfortunately the designations ‘H’ and ‘M’ have been transposed and could cause confusion.
Two rarities are then covered, the ‘Dicker Max’ and ‘Sturer Emil’, mounting massive 12.8cm guns, only built as prototypes and both types used in Russia.
The book then moves on to the ‘Ferdinand’ (although the book refers to the later name ‘Elefant’) mounting an 88mm gun, then the similarly equipped Hornisse/Nashorn which was based on a PzKpfw III/IV chassis.
The next type described is the Jagdpanzer 38, an enclosed armoured hull on the Czech 38(t) chassis mounting the 7.5cm PaK 40. Aside from the ‘Elefant’ all preceding types were open-topped. Unfortunately the captions for the colour photos of the two museum exhibits have been transposed
We then return to the ‘Ferdinand’ (after Dr. Porsche) and its upgraded version called the ‘Elefant’ .
The section on the Jagdpanzer IV/70(A) is very interesting, as images of this obscure Jagdpanzer variant are rare, and here we have eight wartime images. Four are of the example captured by Free French forces (NOT U.S., and NOT sent to the USA for assessment) followed by a colour image of the same vehicle in residence at the Saumur Tank Museum.
The standard PaK 40 75mm armed Panzerjager IV, longer-barrelled Jagdpanzer IV/L70 and the Hybrid Jagdpanzer IV/L70 (A) are covered in depth including photos of surviving examples (Although the Jagdpanzer IV/L70 (V) was photographed at Aberdeen Proving Ground, not Saumur).
Despite the above mentioned errors this book is absolutely stuffed with information, and the sheer volume of photographs (many new to me) make the cover price an extremely economical way of acquiring so much information, especially with the current offer at Casemate. There are photographs on virtually every page, in a large format so details can be clearly seen. The colour plates give camouflage schemes for each type, useful for model-makers and wargamers.
Highly recommended.
Available from good bookshops and many on-line retailers.
Casemate Publishers www.casematepublishers.co.uk