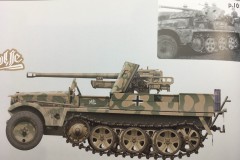 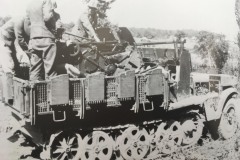 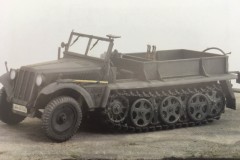 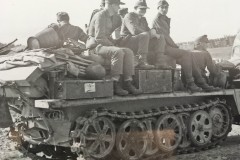 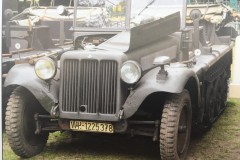 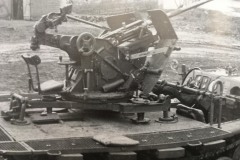 By Dr. Nicolaus Hettler
Published by Nuts & Bolts
www.nuts-bolts.de
The Sd.Kfz.10 must be one of the more widely used German halftrack vehicles of WW2, and most period photos will have this vehicle or one of its derivatives somewhere in the shot. Extremely widespread, these little halftracks appeared in every theatre of operation, and were very commonly used for pulling light guns or for the basis of light flak transport. Only towards the end of the war, when light guns no longer packed enough punch, did the plucky Sd.Kfz.10 start to be replaced.

This book continues the format of previous volumes, in an expanded 240-page A4 softback style. The opening chapters describe how the D7 series chassis evolved, and became the basis for the Sd.Kfz.10 and the versions which were built – most prominently the Sd.Kfz.10/4 and 10/5 versions which mounted a single 2cm. Flak gun. The organisation of units and the use of the halftracks are described in detail. The bulk of the book is taken up with superb photos with very informative captions, which explain much about what is shown in each picture. There follows a sequence of full 1/35 drawings in all views, showing the main variants, and including three-quarter drawings to show the vehicle in 3D – which can help to interpret the plan drawings. After this, there are 16 colour plates, based on accompanying photos, showing what the halftracks would have looked like in real life.

The last fifty pages are full of pictures of preserved vehicles, showing details that modellers need, and finally there are some photos of 1/35 models of the Sd.Kfz.10.

MAFVA members will know that there are many kits of these halftracks in different scales. Most significant in 1/35, the Dragon range includes early and late versions of the Sd.Kfz.10, 10/4 and 10/5. The advantage of the Nuts and Bolts book, to my mind, lies in the specific information that can help get accuracy of details and a precise context in terms of camouflage, stowage, and uniforms. I don’t have any comparable book in my library, and I will certainly rely on this resource when making my models!
As always, the Nuts & Bolts team have produced a winning combination of detail and explanation, providing the modeller with all the necessary information to make an accurate model. A great addition to the library!