Tuesday, July 27 Become a MAFVA member for as little as £16! Click Membership in menu below
You are at:Home»News»Buffalo Soldiers……The President’s report on the 2019 AMPS Show

A hardy few MAFVA members have ventured to the annual show put on by The Armor Modelling & Preservation Society (A.M.P.S.), so MAFVA website impresario John Paulding and I decide we would visit the Colonies. This year the show was at the Buffalo Grand Hotel, Buffalo, New York State.

AMPS is a relative newcomer on the modelling scene, but is a very well organised group of enthusiasts from across the continental USA, Canada and overseas. They have a magazine ‘Boresight’, website and is organised in ‘chapters’ wherever there are sufficient members to set up shop. 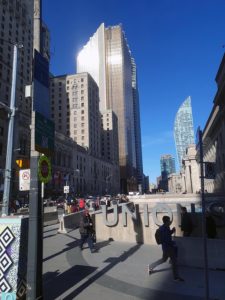 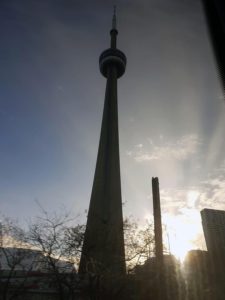 The CN Tower at dusk. Toronto.

JP did some research and saved both time and expense by getting us tickets with Transat, a Canadian airline. Thus we started on the Tuesday evening with me picking JP up from his home, then we spent an hour at the Cambridge MAFVA branch meeting before driving to my home for an early night. My wife dropped us at Baldock station the next morning and we caught the train all the way to Gatwick Airport. A free shuttle train took us to Terminal 4 where we had a sedate breakfast.  Needless to say I triggered security alarms with my ancient mobile phone, but the chaps were very polite and were soon sending us on our way. The flight was good, the food ‘interesting’ and seven hours later we touched down in Toronto. Then the fun began. We were given directions to find the Greyhound bus, but missing the vital phrase ‘catch the shuttle to terminal 1’….  JP and I burst through the doors just as the bus pulled up. That took us into central Toronto, an interesting modern city where we transferred to the Greyhound bound 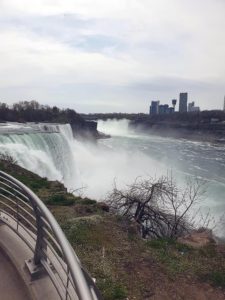 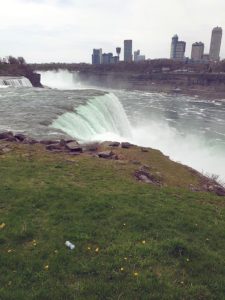 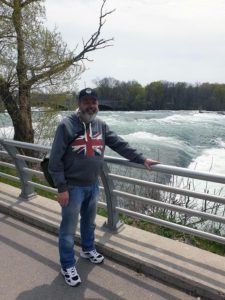 for Buffalo. After finally crossing the Canadian/U.S. border we were soon sat in the hotel bar with a spectacular burger and a beer each. A slow start on the Thursday and after breakfast and a recce of the numerous halls within the hotel, we met a few AMPS guys, and decided to use this ‘spare’ day to visit Niagara Falls. We caught a local bus which had a standard fare of 2 dollars, no change given, whenever you got on. We did the proper ‘Brits on tour’ thing, and after seeing the Falls, found a very nice pub! On our return to the hotel, more AMPS guys were in evidence, so we ate, drank, and hit the sack.

On the Friday it was set-up day, so after introducing ourselves, we went to visit the Naval Park using the free tram. The Buffalo Naval Park https://buffalonavalpark.org/ has the U.S.S. Little Rock (Missile Cruiser), U.S.S. The Sullivan’s (Destroyer) & U.S.S. Croaker (Submarine), all of which we can visit, a Fury, Voodoo, Huey helicopter, Nike missile, M84 Mortar Carrier, M41 Light Tank, PTF-17 fast patrol boat, and indoors with a host of other exhibits, a P-39 Airacobra. The museum building also has a gift shop, neat restaurant, and a bar…….. 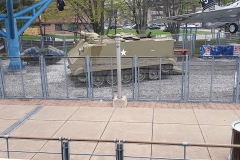 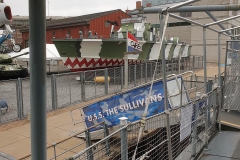 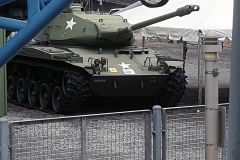 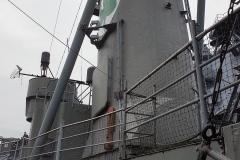 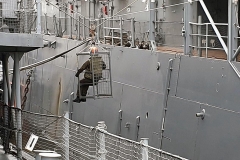 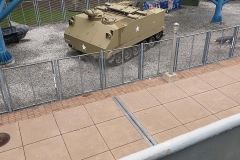 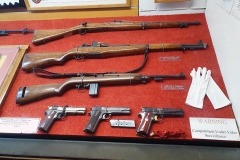 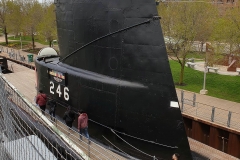 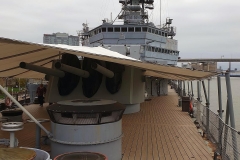 Returning to the hotel we found the show was in full swing, and we did a tour of the vendor’s rooms.  There we met numerous ‘names’ from the internet, including prolific author David Doyle, and were treated to a demonstration of the camouflage nets made (in front of us!) by Kim Taylor of Thachweave products.  The fine detail of the woven fenders for aquatic vehicles has to be seen to be believed! Many more vendors were present selling every modelling product imaginable, although of course we would not be able to take paints and glue on the flight home.

We also met up with two other brits who were present, Mark Gilbert, well-known for his ’Centurion affliction’, and Chris Lloyd-Staples, the MAFVA Research Officer, who is also a VP of AMPS. Chris introduced us to numerous AMPS personalities, and explained the judging process they use.  Similar in many respects to the current MAFVA system, but with much greater manpower using teams of four sat at tables. They judge the models before they go on display, with messengers taking the models to the display room. We later met up more friends and went out for dinner. (And more beers) 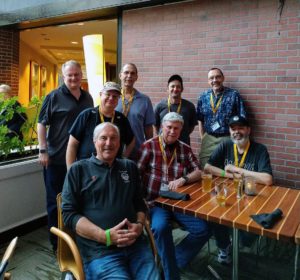 Saturday dawned and we were well into the show now watching the ‘action’. Chatting with participants and spending some cash on books and ‘safe’ products. JP even bought an Italeri M110 kit that he had been chasing for some time. We even managed a ‘Presidential summit meeting’ with John Charvat the AMPS head honcho, a bit of a gamble considering that U.S. President William McKinley was assassinated in Buffalo! All too suddenly it was time for the presentation of awards, which was very different from the ‘reserved’ British approach. As well as applause, popular awards were greeted with whoops, high fives, fist bumps and good old rebel yells, very entertaining!

Another difference was the lack of club/branch displays, but given the distance travelled by participants, to bring a car full of models was not feasible.

Photos of the models in the competition.

PS: AMPS 2020 will be in Harrisburg, Pennsylvania. Who’s up for it?