Sunday, August 14 Become a MAFVA member for as little as £16! Click Membership in menu below
You are at:Home»Miscellaneous»Castlemartin Open Day 1996

I’ve been going through some of my old photos for some of my friends in South Wales MAFVA and have been scanning a set of prints that I took at the last Open day held by the German Panzers at Castlemartin back in 1996.  Here are a few of them to give you an idea of what a Leopard 2 pack change is like, followed by the tank driving over a car and crushing it, about 20 minutes later (the recovery truck picked up the crushed car and put it in the MAN truck).  Since then there have been a few Open Days there with just British Army vehicles, but nothing now for several years as it costs too much to put it on. 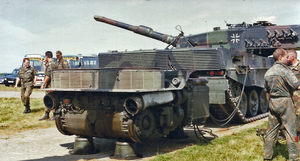 A Leopard 2 with its power pack removed for test, but with electrical power cables still connected to the tank 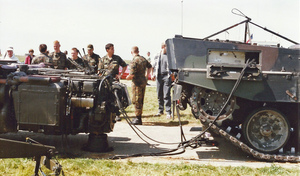 A side on view of the power pack and its connections 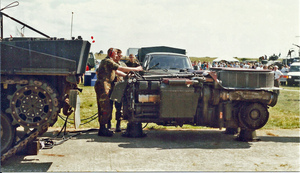 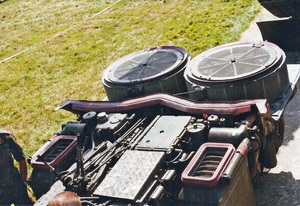 Looking down on the power pack 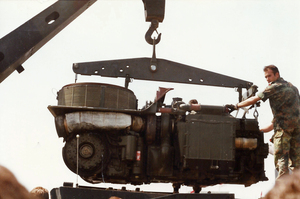 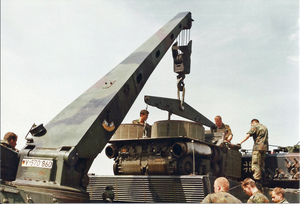 Another view of the power pack going in 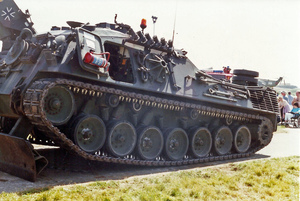 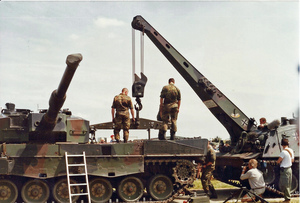 Nearly there. There was an unidentified film crew there at the same time 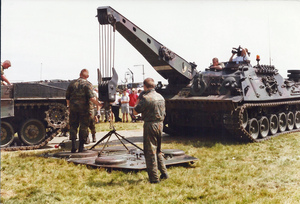 The final thing is to put the engine decks back in place, using the Bergepanzer again. 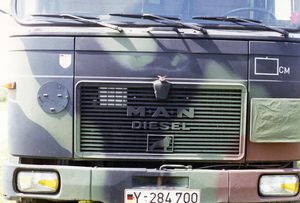 A close up of the front grille of a MAN truck. Theses were used at Castlemartin to carry ammunition, with the hazchem plate to the right here covered over. All trucks had headlight deflector strips fitted, with a “CM” tactical marking to the right, and a Castlemartin Ranges badge to the left 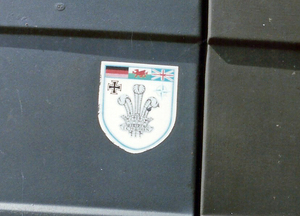 The Castlemartin badge used by the Germans

The MAN and the Magirus Deutz, together with a VW Iltis ambulance, just in case. 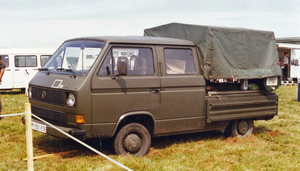 One of the fitters’ VW Transporter pick-up trucks 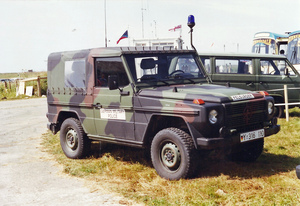 A Military Police vehicle with both German and English writing on it.

If you want to make a model of any of these, there are several 1/35th scale models of the Leopard 2 that could be used.  Both the Bergepanzer and the Magirus Deutz are available, at a price, from Militarmodellbau Hubert Mors, who also do the Iltis.  The VW Transporter is also available in various versions from Takom.  There are also several models of the powerpack.  Real Models do one to be shown inside the engine bay, and Perfect Modellbau do a complete engine, along with lifting frame, and the temporary control levers as in these photos. Not in these photos, but there were also loads of Mercedes Benz Unimog trucks in Castlemartin, and there’s a good Revell kit of one of these.