Tuesday, January 19 Become a MAFVA member for as little as £16! Click Membership in menu below
You are at:Home»Reviews»Haynes Centurion Main Battle Tank 1946 to Present. 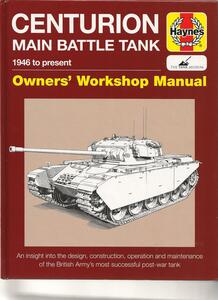 The Centurion has an outstanding history, designed using mechanical cog and lever technology of WW2 but enduring as a tank still used today by some of the world’s most effective armed forces.  The developmental history includes an explanation of the many upgrade Marks and adaptations by foreign armies.  As befits a Haynes manual the technical aspects have prominence so the chapter on the many Centurion variants has descriptions of: how the bridgelayer deploys its bridge; how the dozer blade on the Centurion dozer works; and the difficulty encountered when deploying the Ark trackways. A gem is the lucid and living history type account by a former Centurion crewman of life with the tank as a BAOR serviceman.  There are accounts of the many post colonial and ideological conflicts in which Centurion served post WW2.  This is an enthusiast’s book written by a lifetime enthusiast and the most comprehensive account of this tank to be written for a number of years.  Recommended.