Friday, February 26 Become a MAFVA member for as little as £16! Click Membership in menu below
You are at:Home»Reviews»Haynes Chieftain Main Battle Tank 1966 to Present. 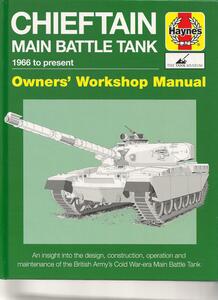 Conceived as the “iron curtain descended on Europe”, the Chieftain is the archetypal British Cold War tank intended to counter the massed tanks of the Soviet Army in a possible incursion into Western Europe.  Given thick armour protection and a powerful armament, a multifuel engine was also envisaged to enable maximum utility on a nuclear ravaged battlefield where fuel shortages were anticipated.  The complexity of developing this revolutionary engine necessitating many upgrades gave the tank a reputation of unreliability, yet eventually became a well regarded weapon after faults had been eliminated.  That a considerable number were exported, despite strong competition from less costly alternatives is a testament to its ultimate soundness as a design.  The book has a good description of this development and is strong on the technical account of automotive, gunnery, and fire control systems reading almost as a user manual, including how to rectify faults. All the Chieftain variants are described along with a few oddities which didn’t reach series production.  The well selected photos are from the author, Tank Museum and other contributors, and include many useful detail views.  A very good comprehensive account.  Thanks to Haynes for the review sample.                                                                                                                                 John Ham. May 2017.