Wednesday, March 3 Become a MAFVA member for as little as £16! Click Membership in menu below
You are at:Home»Featured»Croco 1/72 scale Type 92 Tankette Review

Complete resin models have been available in small scales (1/76 – 1/72) for many years but most manufacturers are based in UK.  Whilst Milicast and Matador Models produce the lion’s share of small scale resin kits there are numerous other small “cottage Industry” manufacturers that have small ranges of AFVs.  Most touch on subjects that the big commercial manufacturers have ignored and so they fill an important gap in the market.  It is always good to see a new manufacturer and  Croco Models from Latvia have recently produced the Japanese Type 92 Jyu-Sokosha Tankette. 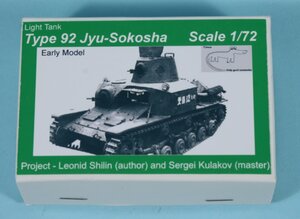 his was the Empire of Japan‘s first indigenous tankette and although a light tank was, when first introduced, called the Type 92 Heavy Armoured Car so that it fell under the control of the Cavalry rather than the Army as it was likely that the Japanese Army, sceptical about the value of AFVs, would have cancelled the project.  Although only 167 tanks were produced it had a significant impact on Japan’s operations in Manchuria in the 1930’s.

Croco Models is made up of owner Leonid Shilin and master modeller Sergei Kulakov and the Type 92 is their first foray into the market.  The first and most striking thing is that everything is packaged in a tiny box not much bigger than a matchbox.  However, this is no simplified Wargames kit as it consists of over 50 parts. Most of these parts go to make up the suspension which represents the 6 double wheels per side early production version.  These items are very delicate and great care has to be exercised taking them off the sprue.  The tracks are challenging as they consist of 6 thin strips that need to be delicately bent around the running gear.  The only other way of replicating this would have been to provide the entire suspension and tracks as a single piece but much of the detail would be lost this way.  However, putting this tank together is not for the inexperienced or faint hearted!

The two major parts make up the hull and these pieces are really detailed.  The grab handles for the engine covers are particularly well done and I don’t recall seeing anything this finely done in injection moulded plastic – let alone resin.  Model makers might want to scratch build the 13.2 mm and 7.7 mm machine guns as it is difficult to replicate gun barrels in resin.  (Although to be fair Croco have made a good effort here.)  An instruction sheet is included, although it is very basic, consisting of a photograph of all the parts and three photographs of the finished model with numbered arrows indicating where everything goes.  No decals, figures or painting scheme is included. 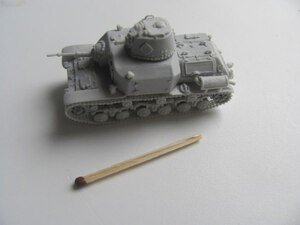 This is not a model for the in-experienced or junior model maker due to the large number of delicate parts.  But model makers that build small scale Japanese AFVs will be delighted with this kit.  It is very nicely detailed and although a challenge to build I am sure it will prove popular.  Recommended for experienced model makers and thanks to Croco for the review sample.