Wednesday, March 3 Become a MAFVA member for as little as £16! Click Membership in menu below
You are at:Home»Reviews»Der Tiger, volume 3 reviewed 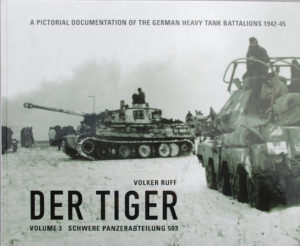 This is the third in a planned series of 10 landscape format hard-cover books covering the various German Heavy Tank units using the Tiger from Volker Ruff.  This third volume deals with schwere Panzerabteilung 503, from its’ formation in 1942, through to the end of the war.  Containing over 150 archive photos and accompanying text which is provided in both German and English languages throughout, it fills 128 pages. Some of the photos come from well known archives (Propaganda images) while the bulk come from private collections, including veterans of the unit. These show us a mix of other images which enable us to see the wartime service of the unit.

Each element of the book has some background text giving details of when and where the unit was in action, to accompany some appropriate archive photos. It starts when the unit was first formed in 1942, and interestingly where the tanks they were provided with for initial training were the Porsche VK 45.01 prototypes.  It was not until December of the same year when they received their first 20 Tigers, along with 31 Pz III Ausf N, to create mixed platoons. Then we see their vehicles mounted on railcars as they were moved to their first action, on the Russian front.  Unit movements over any large distance was done be train so we see a number of photos showing them loaded on flat cars, and fitted with the narrow transport tracks. Serving in Russia we also get to see them in winter camouflage. The unit also participated in the Kursk battle but afterwards needed to be re-equipped. So the story then moves to France where they were sent to Normandy, and after being caught up in the heavy bombing of Operation Goodwood, they had to withdraw across the Seine and again be re-equipped. At this stage, we also see 503 being equipped with the Tiger II, including a number with the rarer Porsche turret. This sees their story return to the Eastern front and combat in Budapest, then near Vienna and the end in Bohemia, where at least one of the photos shows they still had at least one of the Porsche turreted tanks.

With the large format photos, the detail is excellent and will make this especially popular with modellers.  Examples that struck me were maintenance work in a factory building in Russia, where large cranes were capable of lifting a complete Tiger I, and another where we see in super detail the short axle extension used for fitting the outer roadwheels, a detail I can’t remember seeing so well before.

​Another excellent book for this series.

This one is available here in the UK through the importers Panzerwrecks.