Sunday, July 3 Become a MAFVA member for as little as £16! Click Membership in menu below
You are at:Home»News»German Heavy Fighting Vehicles of the Second World War – Kenneth W. Estes 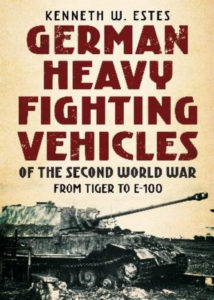 Our friends at Fonthill Media have just sent over details of a new book that’s sure to be of interest… German Heavy Fighting Vehicles of the Second World War – From Tiger to E-100 by Kenneth W. Estes is a comparative study which reveals interesting details of the largest German tanks and assault guns with details recently confirmed by current restoration projects.

• A balanced treatment of a variety of unique designs that responded to military requirements of their day
• Many previously unpublished photographs and images
• Interesting examples of battle damage
• Incorporates for the first time details of current and ongoing restorations of these vehicles
• Of much interest to the military historian, modeller and video-gamer such as War Thunder and World of Tanks
The German Army faced tanks of superior size, armour and firepower from the outset of the Second World War. Although their Panzerwaffen handled the Polish campaign, war with France meant confronting superior heavy and medium tanks like the Char B and Somua, with 47-mm high-velocity cannon that penetrated German armour with ease. Even greater challenges emerged with the Russo-German War, for the Germans had no initial answer to the KV-1 heavy tank and T-34 medium. The successive technical shocks of superior tanks introduced by each side produced a gun-armour race that continued in some manner even after the war’s end. The Germans placed a premium on technological quality and superiority over mass production, for which their industry remained unsuited. Not satisfied with the advantage they obtained with the Tiger and Panther tanks, the Army and Hitler pushed for larger and more powerful tanks. The heavy tanks and assault guns developed and fielded by Germany continue to capture interest among modellers, military history enthusiasts and the armed forces.