Sunday, July 3 Become a MAFVA member for as little as £16! Click Membership in menu below
You are at:Home»Diorama»JP’s ICM Ford WOT 6 in September Airfix Model World 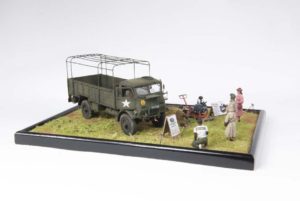 The ICM 1/35th Ford WOT6 kit has come in for quite a bit criticism in the forums because it was vaguely described as just a Ford WOT6 with no subtype mentioned. The kit came with a machinery back with the ‘gates’ that allowed entry between the machines, but no machines. That left the modeler with the choice of scratch building a general service back or sourcing machines from the resin aftermarket and potentially spending more than the kit itself. The tyres also came in for comment as some thought they were based on a post-war tread and not appropriate for a WW2 model. When Airfix Model World asked me to do an out-of-the-box build these criticisms posed a problem. How could I do a straightforward out-of-the-box build of a kit that had already been panned for being ‘inaccurate’? I eventually came up with a solution. Build it as a restored vehicle – which is obviously what the kit was based on – and place it at a modern day military vehicle show. 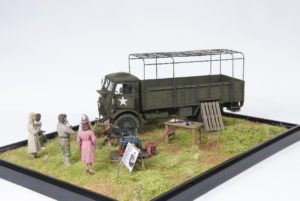 So that’s what the article shows. An out-of-the-box build (with a few tweaks and hints) and a diorama of a re-enactor giving a demonstration next to the vehicle and crowd of onlookers in a mixture of WW2 period dress and modern clothes.

The digital version of September 2019 issue of Airfix Model World goes on sale today and you can read the full build feature on pages 70 to 77. The printed version should be in book shops shortly. 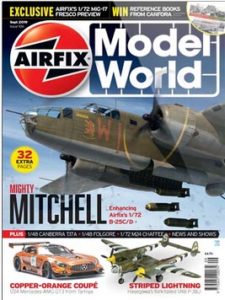 Remember MAFVA members can subscribe to Airfix Model World by clicking the ad at the top of the page and obtain a discount on your subscription.