Sunday, October 2 Become a MAFVA member for as little as £16! Click Membership in menu below
You are at:Home»Reviews»Krupp Protze and variants 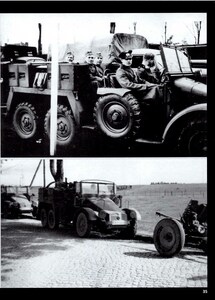 I got this publication from SABOT directly, being interested in the Protze ever since Tamiya produced the kit back in the 1970’s.  This paperback has 40 pages of photos, mainly two per page, and very crisply printed.  The written content consists of just a short opening paragraph, after which there is no writing at all, other than a title on page 21!  I’m going to say, however, that I’d much rather have seen captions for the photos, pointing out features shown in the pictures.  As it is, there are undoubtedly things that the average reader might miss within the shots, and points of interest could be picked out.  I am pretty certain that I could have written good captions!

The first half of the book covers the Kfz.70 version, which has a cargo body and the second half deals with the Kfz.69 which was specifically a tractor for the 37mm anti-tank gun.  The third part is a short section covering the Kfz.83 carrier for a searchlight generator, though in fairness,  most of the photos show the separate searchlight (which is available from AFV Club) rather than the Protze vehicle.  For a modeller

wanting to add details to a 1/35 kit, this book is going to be invaluable, and this is worth the $18 plus postage.