Sunday, July 3 Become a MAFVA member for as little as £16! Click Membership in menu below
You are at:Home»Reviews»M7 Priest by David Doyle – a review 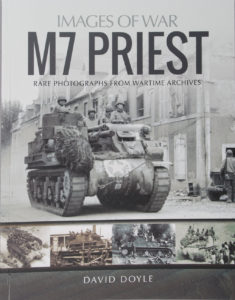 A new Images of War book from Pen & Sword, covering the M7 Priest, an American self-propelled 105mm howitzer, and known as the Priest thanks to the machine gun ring mount, which was felt to represent a Priest’s pulpit. The first self-propelled artillery piece for US forces which was produced in large numbers, using the chassis of the M3 tank and later the M4 Sherman. It carried the well proven M2 105mm howitzer, was widely used in Europe and the Far East, and went on to be used in the Korean war as well.

The Priest was built by a number of different manufacturers and there are a variety of detail changes between them  illustrated in this book. Chapter 1 covers the Baldwin Locomotive Works T32, and these were the pilot vehicles built in 1941, First built without the distinctive ‘pulpit’, but that was added as we see in photos from the Aberdeen Proving Grounds. Some very detailed pictures in this section. Chapter 2 tackles those built by the American Locomotive Works M7. Again, lots of detail, both inside and out. A brief chapter 3 is for the Federal Machine and Welder M7, before chapter 4 for the Pressed Steel Car Company M7B1. It leaves chapter 5 to consider the later Howitzer Motor Carriage M7B2, as used in Korea.

Chapter 6 begins to show us the M7 in action, starting with British units in North Africa, along with training US forces in the US before they went to Sicily and Italy. NW Europe and the Pacific theatre. This is followed with a section of colour images, some from wartime archives and all round coverage of 2 different restored/preserved examples in collections in the USA before returning to archive images of them in action during WW2 and beyond, into the Korean War.  The whole thing is rounded off with 4 Appendices, which includes the production details of the various manufacturers and their contracts for building the M7 Priest, as well as Technical Specifications and the US Field Artillery Battalion organisation.

Plenty to interest the armour and artillery historian, and a high level of detail that I am certain modellers will love.

​Thanks to Pen and Sword for this review copy.