Wednesday, January 20 Become a MAFVA member for as little as £16! Click Membership in menu below
You are at:Home»Reviews»Osprey Technicals – a review 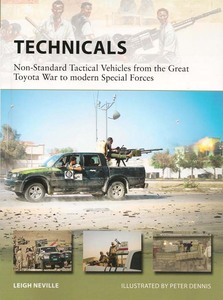 From out of the Saharan desert a column of pick-up trucks bristling with an assortment of weapons swarm into a Libyan airfield causing mayhem, shooting up bombers, attack helicopters, tanks and AFVs. This is the Great Toyota War of the 1980s after Libya’s invasion of neighbouring Chad. The trucks are Technicals and in the hands of small armies and rebel or insurgent forces are potent weapons, seen in most of the world conflict zones since the late 1960s. Based on commercially available civilian vehicles they are not subject to arms embargoes and can be smuggled in across friendly borders. Easily maintained they require little training in use and can be fitted with a variety of weapons – MGs, AA cannon, grenade launchers, recoilless rifles, multiple rocket launchers and antitank missiles – all in local workshops. The success and adaptability of Technicals have led to their adoption by conventional armies, favoured by special operations forces. The book has scores of images of typical vehicles in various wars, some with unusual weapon systems. A notable colour plate shows a bizarrely dressed Iraqi paramilitary in a Darth Vader-like uniform on a Nissan Technical. There few accounts of Technicals as a specialist subject. Recommended. Thanks to Osprey for the review sample.