Sunday, October 2 Become a MAFVA member for as little as £16! Click Membership in menu below
You are at:Home»Reviews»Panther and Jagdpanther Units, Part 2

The Eastern Front – From Operation Bagration to Berlin

Written and illustrated by Denis Oliver and Stephen Andrew 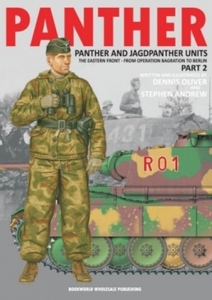 In the summer of 1944, the Russians launched a series of offensives, under the codename Operation Bagration, that would take the Red Army from the fields and villages of Byelorussia and the Ukraine to the streets of Berlin. Forced onto the defensive, the Germans employed their armoured units as fire-brigades, shuttled from one sector to another in an effort to halt, or at least slow, the Soviet juggernaut.

The Panther tank and Jagdpanther tank destroyer were two of the most potent weapons in the Wehrmacht’s inventory and both are examined in this book by Dennis Oliver and Stephen Andrew, their first for Bookworld Publishing.

Following on from an earlier title, this volume concludes the unit histories of the army’s Panther battalions and chronicles the service of the Jagdpanther units on the Eastern Front. Complemented by 13 pages of painstakingly researched colour illustrations, black and white archive photos, detailed orders of battle, organisational charts and campaign maps, this book provides a superb reference for the military enthusiast, modeller and general reader. A further volume will cover the Panther units of the named formations, the Waffen-SS and the Luftwaffe.