Sunday, April 11 Become a MAFVA member for as little as £16! Click Membership in menu below
You are at:Home»Reviews»Publications»Panzers in Berlin – A Review by Robin Buckland 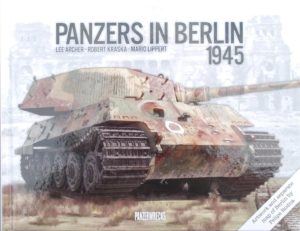 Wow! I have long been a fan of the books from Panzerwrecks and not only has this jumped straight in as my favourite but also to the top of the list for my best new books of 2019. I have never really tried to pick top titles each year but this one just jumped out at me for my prime interest in armoured vehicles, both as a modeller and with my interest in military history. A hardback book with 392 pages of fantastic pictures and research.

It starts off with some background on each of the main armoured units involved in the fight for Berlin during the final days of April and the first few days of May 1945. As is pointed out by the authors, there may be elements from other units, but record keeping I am sure was not high on the list of priorities and vehicles were transferred between units and markings may not have been changed. Then it changes to look at the various areas of the city, such as Neukoln & Tempelhof, Wannsee, Tiergarten, Reichkanzlei just to pick out a few examples. To help the reader, there is a helpful fold-out map of the city tucked into the book as well. Each section has some background text and then a series of full page photos, in the style for which Panzerwrecks have built their reputation.

The photo collection has a nice mix of subjects, and some of the unusual armoured vehicles to be found in Berlin at this stage of the war is fascinating. As well as the Tigers and Panthers you might expect, also training tanks built on the Pzkpfw 1 Ausf A chassis, a rare one-off Dutch armoured car and even a couple of British WW1 tanks. One of the main features to be found are those older tanks, Pz IV and Panthers especially, with engines and running gear removed and then dug into the streets, just the turrets above ground. Even better, some have a series of photos that illustrate the same tanks over time, from the immediate aftermath of the battle, with bodies still in the streets around them, to later when the streets had been cleared and finally when they were dug-up and removed for scrap. With other wrecks, seeing them in place after the war was over, with people simply walking past and going about their lives or soldiers (British, American and Russian) standing in front of them for a souvenir picture. Many wrecks were moved to collection points, which are marked on the maps and these are illustrated as well.

Add some super artwork by Phlipe Rodna which are placed on pages facing the photo of the wreck they illustrate, and who also did the maps. On top of all this many pages also feature a QR code which enable you to point at them with your phone and it will illustrate the location today thanks to Google Street View, very clever.

The level of detail in the book plus the quality of the images and how they also illustrate life in Berlin once the fighting was over is simply stunning. For the military historian interested in WW2 and for armour modellers, I think this is a real treasure trove. Highly recommended without reservation in my opinion.

It is available now from Panzerwrecks.