Sunday, July 3 Become a MAFVA member for as little as £16! Click Membership in menu below
You are at:Home»Reviews»Renault FT & M1917 Light Tanks reviewed 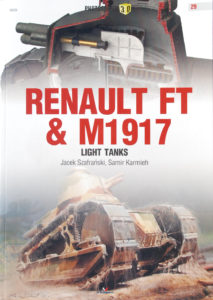 A new addition to the Photosniper 3D series from Kagero, a softcover book of 180 pages packed with marvellous references, bringing the series up to number 29. The 16-pages of the Introduction covers the 25 year service history of the FT, in both WW1 and WW2 and operated by France and a number of export customers as well. These include Poland, Russia, the USA, Belgium, Brazil, Czechoslovakia, Spain, Finland and Japan. In WW2, after the fall of France in 1940, large numbers were put into service with the German Wehrmacht as well. The whole section is well illustrated with a number of well chosen archive photos.

The second main section, pages 17 through to 82 contains modern colour Walkaround photos that show pretty much every detail you can think of with two particular surviving examples. One is the restored example on display at the French Musee des Blindes at Saumur while the second shows a restoration project which is still in a heavily rusted and incomplete state which is now in Poland, having apparently been returned from Afghanistan in 2012, where it was found. With 2 photos per page these are good and clear and make for useful references, especially for the modeller. The remainder of the book is filled with the superb 3D computer generated images that these Kagero books are well known for, showing yet more excellent colour references. The detail amidst these include both the rounded cast turret and the welded/bolted alternative, and armed with either a Hotchkiss machine gun or the Puteaux SA 18 37mm gun. Again, detail both inside and out as well as including handy examples of camouflage and markings that modellers may choose to imitate.

​Another fine addition to the Photosniper 3D series from Kagero, interesting for the armour enthusiast for being the original true turreted tank that had a full 360-degree traverse and very helpful reference for modellers and their kits in any scale.

​Distributed by Casemate Books, who kindly provided my review copy.