Wednesday, July 6 Become a MAFVA member for as little as £16! Click Membership in menu below
You are at:Home»Reviews»Publications»REVIEW: Courage under Fire – The 101st Airborne’s Hidden Battle at Tam Ky 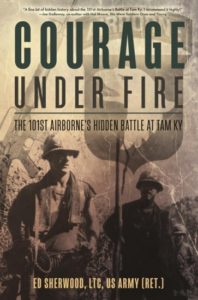 The Vietnam War became very dependent on politics, and following the high casualty rates of the battle that became known as ‘Hamburger Hill’, it was decided to keep the news of further battles quiet. This was especially true following President Nixon’s decision that U.S. Forces would be drawn down and leaving the fighting to the Army of South Vietnam. Consequently elements of the 101st Airborne were flown into the Tam Ky region to seek out North Vietnamese units, where they had the fight of their lives, pushed the enemy off the mountain, but nothing appeared in the press. The American people were not happy with the continuing involvement in a ‘foreign’ war, and Nixon needed to keep the support of the electorate.
Ed Sherwood was a platoon commander in Vietnam and brings his own experience together with his research into this extremely detailed book. He has contacted his fellow veterans, and the families of those who have passed away to tell the story of the individual contacts that made up the hard fought battle. He brings the story to life with descriptions of the soldiers, the personalities, the training and deployment. The ‘official’ records have meat added to the bones with this and put the reader into the scene.
At the end of each section the casualty lists and awards are added and for each day the events back in ‘The World’ are noted. Numerous sketch maps detail the individual actions, whilst larger ones set the area.
At the end of the book are lexicons of military terminology, a list of what happened to the veterans and several pages of thumbnail photos of the soldiers.
If there are any negatives, it is the repetition of phrases, but this is the way the man writes, and he is telling the story of his comrades in arms, a story that has been hidden, both for them, their families and to complete the story of the Vietnam War.
For those with an interest in the Vietnam War, small unit actions, a forgotten era of combat or who wish to study human behaviour, this is a good read. The detail is excellent and will prove useful to both wargamers and historians.