Sunday, July 3 Become a MAFVA member for as little as £16! Click Membership in menu below
You are at:Home»Reviews»Publications»Review – Haynes Enthusiasts Manual AMX30 Main Battle Tank 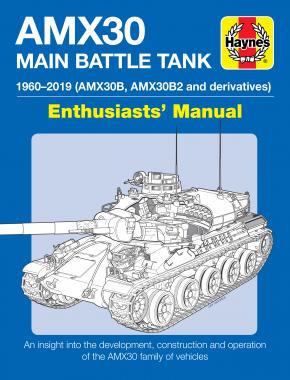 The AMX 30 has been the mainstay of the French armoured forces for over 50 years, with the developments still in service now. My first introduction to the AMX 30 was in the ‘60’s, when my kindly uncle bought me the diecast Solido model.

This book starts with an introduction of the state of the French armoured forces post WW2 and what they were using. The story of the design work is quite interesting as the French policy went for a lighter, leaner tank compared with other western designs. The basic design is well described, followed by the development work for the AMX32, AMX30B2 and AMX30B2 Brennus.

The anatomy of the tank takes us through the whole tank, its sub-systems, weapons, NBC kit, and optics. Maintenance and crew tasks are also described.

The next section deals with the specialist variants of the AMX 30, including the AMX 30D recovery tank,  AMX30 Pluton tactical missile launcher, AU F1 155mm self-propelled gun,  AMX30 Roland and Shahine anti-aircraft missile systems, the AMX30-based engineer vehicles and mine-clearing variants. This is followed by a listing of foreign users of the AMX30 and then a thorough description of service in the French Army. The appendices give the tank characteristics, AMX30 units and production charts of the AMX30B2.

Other than the very ancient (and slim) Profile and a few entries in books, I have seen very little of the AMX30 in print. This book makes up for the dearth of reference material by including all the relevant information backed up with useful photos on virtually every page. There are also many drawings, cutaways and diagrams to support the text, making this the ideal book for enthusiast, armchair general and scale model-maker. The only thing lacking is a set of scale drawings, but there are numerous kits in a variety of scales from several manufacturers such as Heller, Tamiya, Model-Miniature and Tiger.

Highly recommended, virtually the only book you need to buy on the subject.

Review copy kindly supplied by Haynes Publishing and is available from all good bookshops or www.haynes.com .