Sunday, August 14 Become a MAFVA member for as little as £16! Click Membership in menu below
You are at:Home»Reviews»REVIEW: Marine Corps Tank Battles in Vietnam 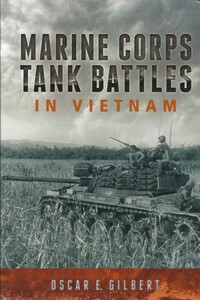 The author Ed Gilbert continues his series of books on the history of the U.S. Marine Corps tanks, this time covering the presence of Marine tankers in the Vietnam conflict. This book was first published as a hard-back in 2007. Following in his established format of official notes backed up by interviews with surviving veterans. These accounts take the form of anecdotes, delivered in their words, and often illustrate the conditions the marines were experiencing, and their reactions to their surroundings. Later in the conflict they describe how discipline started to break down, drug abuse, racial discord and political reaction at home affected them.

The initial landings in 1965 were across the beaches at Da Nang, and were heavily covered by the Press. The book covers this and subsequent ambushes, sweeps, and actions up to the final withdrawal of USMC units in 1971. The Vietnam conflict was the first to provide TV reports which the public back in the United States could watch on their tea-time news, and this was one of the causes of the anti-war movement.

The main tank operated in Vietnam by the Marines was the M48, but these were supported by the M103 Heavy Tank, M67A2 Flame Tank, Ontos SP anti-tank weapon, the M51 ARV and M113 APCs, the latter acquired from the army. These are discussed in the text and most are illustrated in the 16 pages of photos. The photos also show local modifications such as the ‘lawn chair’ on a turret roof and jerry-can racks on fenders, ideal information for model-makers.

At the end of the book is a listing of the contributing veterans, and their careers post- Vietnam.