Thursday, December 2 Become a MAFVA member for as little as £16! Click Membership in menu below
You are at:Home»Reviews»Review: Nuts and Bolts 40 – Sd.Kfz.234 part 3 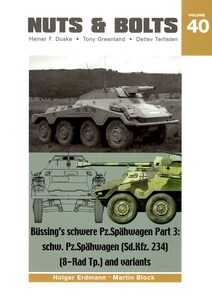 234/1 which had a 2cm gun in an open-topped turret, identical to the type found on other vehicles

234/2 was nicknamed the Puma, and had a 5cm gun in a fully enclosed turret

234/3 had the short 7.5cm Stummel gun, as found on many tanks and half-tracks

234/4 ‘Pakwagen’ mounted the Pak 40 anti-tank gun, and was a formidable weapon system.

Of these, the first into production was the 234/2, which was the only type manufactured between September 1943 and September 1944.  Around 101 0f this type were produced.  The 234/1 then replaced the /2 on the production lines, and around 200 of these were made, with reportedly 88 of the /3 type and 70 of the /4 version being produced.  The manufacturing continued in the closing months of the war, and these cars were coming into action in the last weeks of WW2.

This book, freshly released, follows the familiar format of the N&B series.  The first twenty pages describe the extremely complex chassis with 8×8 drive and steering, making this a very capable vehicle with decent cross-country performance, but very difficult to manufacture and to maintain.  The air-cooled Tatra diesel engine was fitted in anticipation of the cars going to North Africa, but that campaign had ended before the 234 series were being produced.  The Tp. (Tropen) title remained in their name, however, denoting Tropical or colonial theatre.

The next thirty pages cover the organisation of units using these vehicles, beginning with the Puma units in late 1943 and also considering the units in April 1945, by which time much of the imagined organisation of the German army had actually collapsed.  The issues of vehicles to different Panzer and Panzergrenadiere units is covered in exceptional detail, for both the Wehrmacht and the SS, giving the modeller an exact insight into who had which vehicles.

After a few pages describing the plastic models available, the book launches into over fifty pages of photographs of the four different vehicle types, including photos of detailed parts such as sights, radios and so on.  The next 27 pages are covered with scale drawings and 3D drawings of the types of 234, plus also the prototypes and one-off variants, such as a car with a Luchs (Lynx) turret.

The next ten pages have colour side-views of the cars, matched against a photo from WW2, in which the artist (Carlos de Diego) expertly interprets the photo to give his view of what the vehicle looked like.  In my opinion, these are very high quality, and the colours look spot-on.  The last 50 pages consist of photos of the few restored vehicles, plus parts found in museums.  It becomes clear that the Sd.Kfz.234 series is very poorly represented today, with only three vehicles remaining (one /3 and two /4) and all of these in poor shape of restoration.  The book closes with several pages showing 1/35 scale models.

In summary, this book covers new ground, with a lot of information about vehicles that are poorly represented in existing books.  For this reason alone, this newly released book is a fascinating read, but for any modeller wishing to make one of these armoured cars, this volume is a goldmine of really useful information and superb ideas for a model.  In my opinion, all of the Nuts and Bolts books are excellent value, but this one really stands out as something special, filling a huge gap in my library.