Sunday, October 2 Become a MAFVA member for as little as £16! Click Membership in menu below
You are at:Home»Reviews»Review: Nuts & Bolts 39 – Sd.Kfz.6 :  5-ton Zugkraftwagen Büssing-NAG and variants 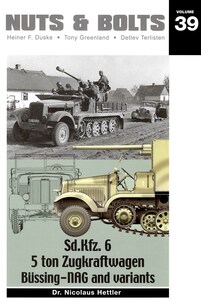 This latest book in the N&B series covers the Sd.Kfz.6 and includes the 6/1 and the 6/2 versions.  The ‘6’ has been much ignored in favour of the more famous Sd.Kfz.7, and is actually more common than readers might suspect, as it is often mistaken in photos for the ‘7’ halftrack series.  The Sd.Kfz.6 began life in the 1930’s, as a series of production types which gradually evolved into the more familiar version which saw service in WW2, with a set of seven wheel positions behind the sprocket, having risen from four and then five sets of wheels on the earlier production types.  The Sd.Kfz.6 was the ‘Engineer’ version, with seats for troops but no large stowage box.  In contrast, the Sd.Kfz.6/1 was the ‘Artillery’ version, with one fewer rows of seats, but a large ammunition locker at the rear, able to take the rounds for the 10.5cm leFH 18 gun, but adaptable for 15cm ammunition types.  The Sd.Kfz.6/2 was the flak version, carrying a 37mm Flak 36.  The book also covers the ‘Diana’ and some prototype vehicles.  As the war progressed, the Sd.Kfz.6 series found its tasks could be covered by the Sd.Kfz.11 and the Sd.Kfz.7 types, and production of the ‘6’ ended in 1943, with many vehicles serving until the end of hostilities

The layout of this bilingual English/German book is much the same as previous volumes in the series, with the first 30 pages covering the design and production of the vehicles, plus their use in Wehrmacht units.  This section is extremely clear and very well illustrated.  The next section is nearly 100 pages packed with photos, with clear captions.  In a few cases, the translation to English is not perfect, and reference to the German text makes it clearer.  To illustrate this point, on page 49 a caption states “Notable are the crank on the left door of the stowage box, and the splash guards.”  The crank refers to the locking handle, and the splash guards are the mud-flaps.  The use of the incorrect terms had me looking for other things in the photos.  While this is not a serious problem, it is a tiny niggle in an otherwise outstanding publication. 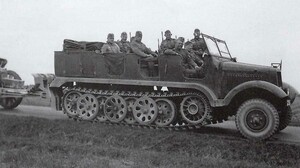 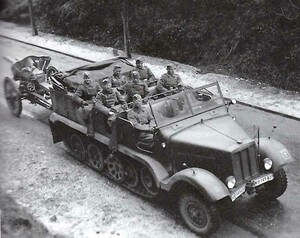 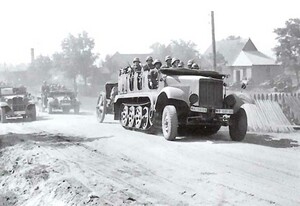 The next 26 pages are full of plans which cover all of the versions of the vehicle in full detail, and will be a great asset to anyone making the halftrack in 1/35 scale.  The plans match closely with those on the Panzer Tracts book, and are a superb memorial to the late John Rue.  After the plans come six pages of colour profiles, illustrating the paintwork and colouring of vehicles shown in b&w photos.  In my estimation, the colours look spot-on.  After two pages illustrating the markings and insignia, the next 50 or so pages show details on three restored vehicles, all of them being ‘Engineer’ versions.  This photographic record is particularly useful for anyone wanting to super-detail their model.

The last 15 pages illustrate 1/35 models by Tony Greenland and Vinnie Brannigan.  These are excellent reference points for modellers.  A caveat, noted in the text, is that the ammo stowage on one model is pure conjecture – the stowage boxes were in reality open to allow the vehicle to be loaded up with the separate projectiles and cartridge cases of the artillery piece being towed.

The Sd.Kfz.6 is suddenly being better covered, with the recent Panzer Tracts 22-3 for the technical coverage, Alan Ranger’s book for photographic coverage, and this Nuts and Bolts book which covers every angle.  This book from N&B is simply stunning, minor translations aside, and it is certainly worth every penny of £25.  Available from Historex Agents in the UK, this book is very highly recommended.

See also the review of the Camera On book of the Sd.Kfz. 6.