Sunday, July 3 Become a MAFVA member for as little as £16! Click Membership in menu below
You are at:Home»Show Reports»Review of MAFVA 2022 Nationals 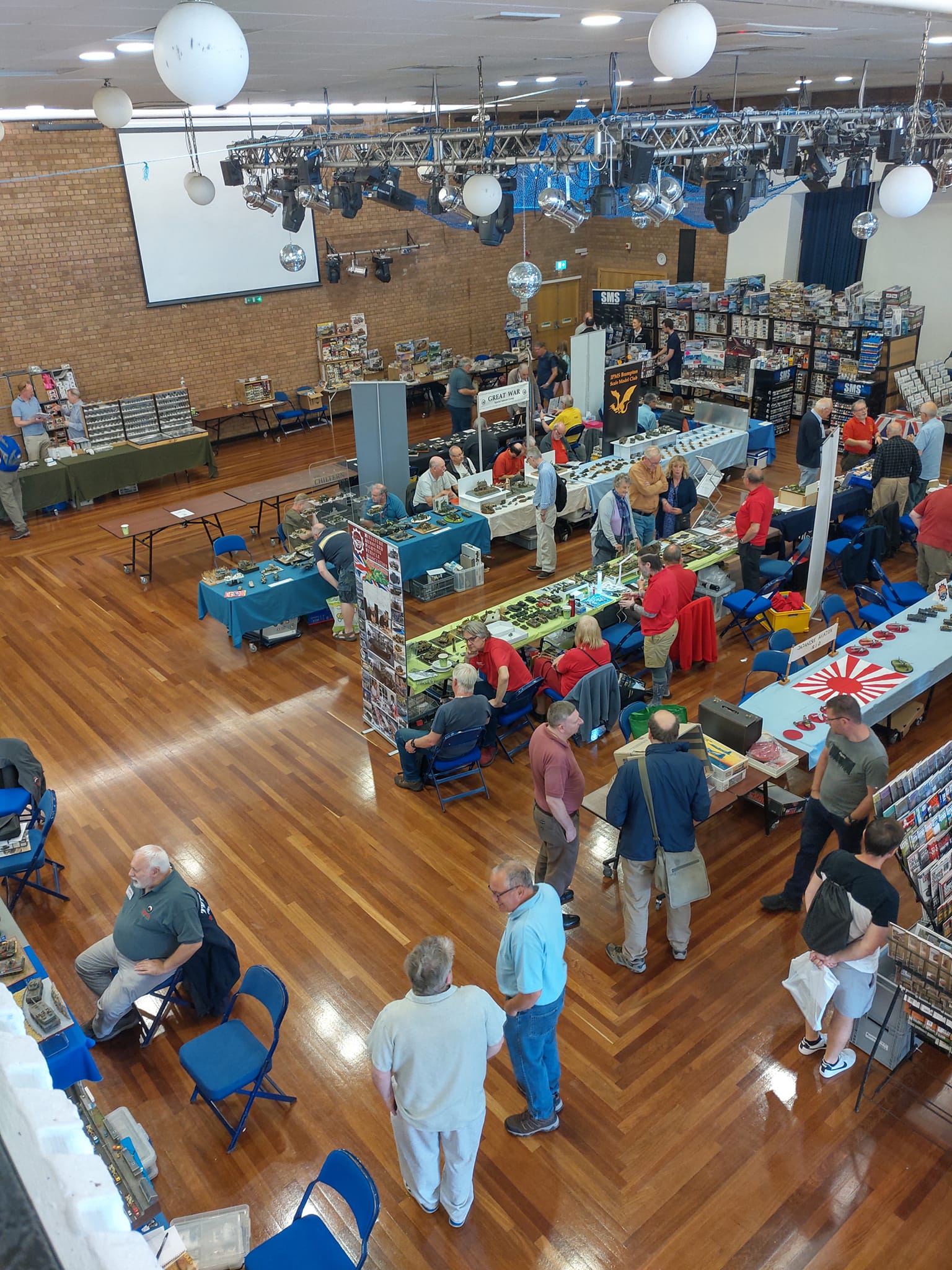 After two years of lockdown, social distancing, and generally being careful, Mafiosi from around the UK and some from overseas, gathered in Cambridgeshire for the MAFVA Nationals. Would the people come? However, the first challenge for many of us was actually getting to St Ives. Since the last show there has been some major road construction, and there is no longer a simple exit off the A14 to St Ives, and in fact you need to leave the A14 near the Cambridge services and approach St Ives on the A1307 if travelling from the East!

A new crew had organised the show, and despite a few hiccups the setting up went well with the traders and clubs finding their slots, meeting up with friends and sorting themselves out. The new management at the Burgess Hall had laid out the tables, and were on hand to adjust the air-conditioning, as it warmed up very quickly. Tea and coffee was on hand for those setting up, and much appreciated. Suddenly it was 10.00 hrs and the doors were open to the visitors. It became obvious from the initial rush that there were a lot of people who had missed modelling events.
There was a also a surprise visitor in the shape of a Ferret Mk 1 Scout car, the first AFV we had at a Nationals since the IWM stopped the Military Vehicle Show.

In no time at all the show was buzzing, both inside the hall and outside where people gathered for a drink, food, or just to chat. The variety of traders had brought along sufficient kits, tools and books to interest everyone, and it is so much better to see the products ‘in the flesh’ than to rely on images on web pages. It also gave the traders the opportunity to connect to their customer base, discuss what people were interested in and perhaps lead on to new products.
In addition, upstairs was the Bring & Buy where folk could sell off unwanted kits and books, or buy an old kit at a bargain price. Also upstairs was the competition tables displaying the best from our corner of the hobby.

The oldest modeller present was MAFVA member 002, Max Hundleby, and he brought greetings from Anton Maund, member 001! MAFVA has been in existence for over 57 years now, and lasting friendships have been made with model-makers around the world with a common interest.
The day flew by, and before we knew it, it was 16.00 hrs and time to present the awards for the competition entries.

Whilst not as busy as previous shows, the event was successful in getting people together for what had been an annual event till Covid struck.
Burgess Hall has been booked for the 2023 MAFVA Nationals on Sunday June 18th. Put that date in your diary now. Traders and clubs can book via the web page.

So much for the words. What you probably want is to see the models, so here are some slide shows, courtesy of ‘Model Nerd’ and Steve Jones to show you what the show offered.

Plenty on offer at the Bring & Buy 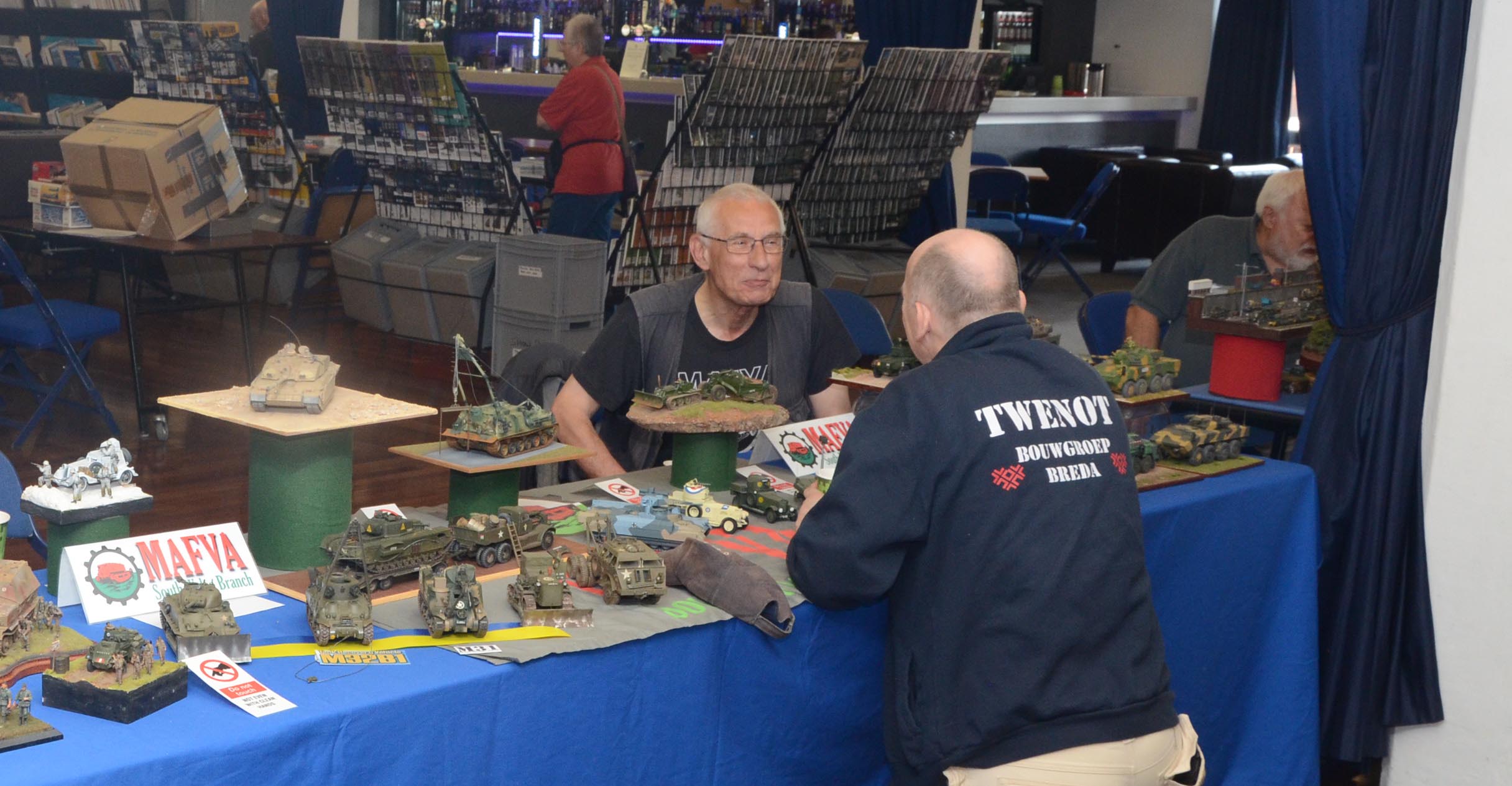 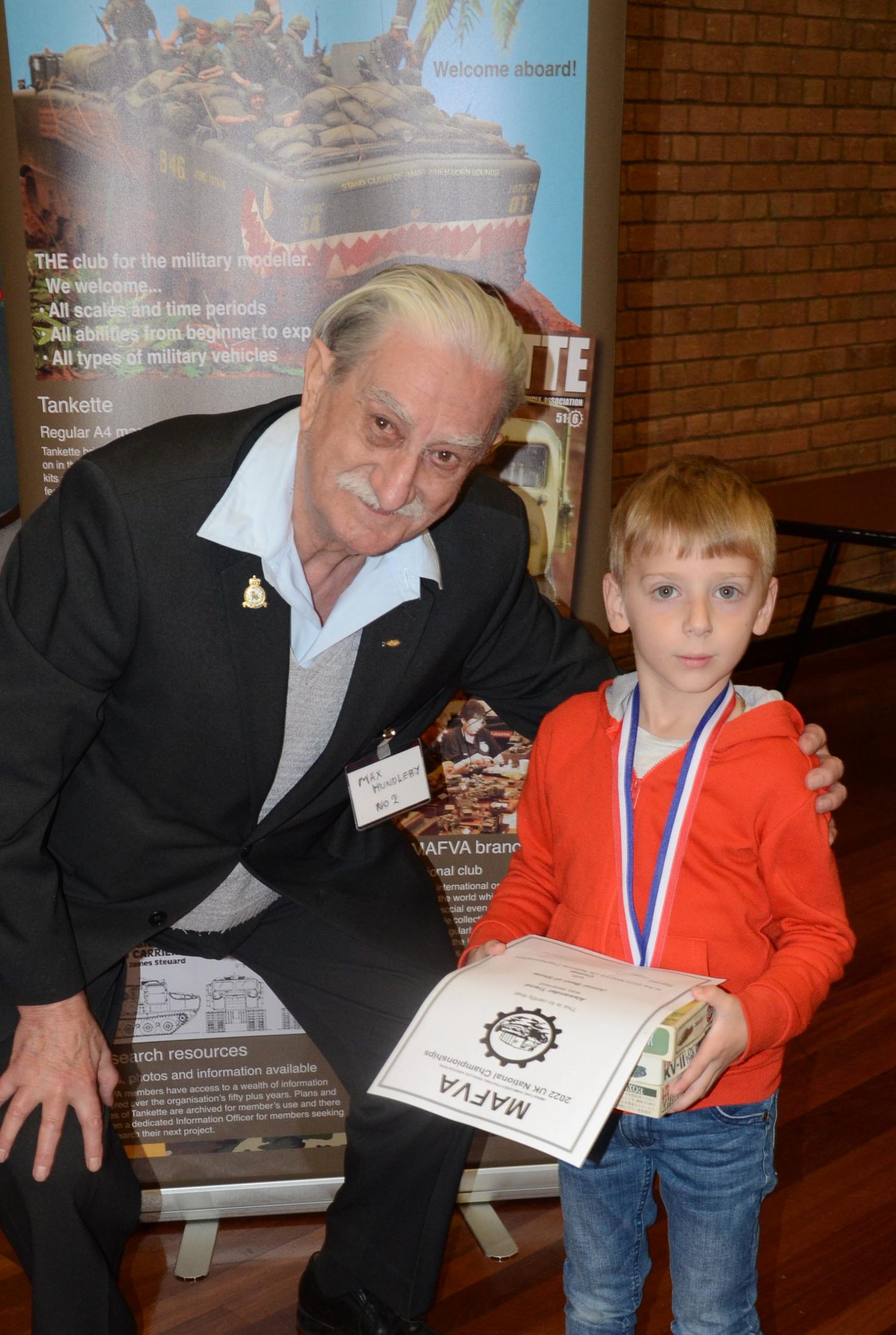 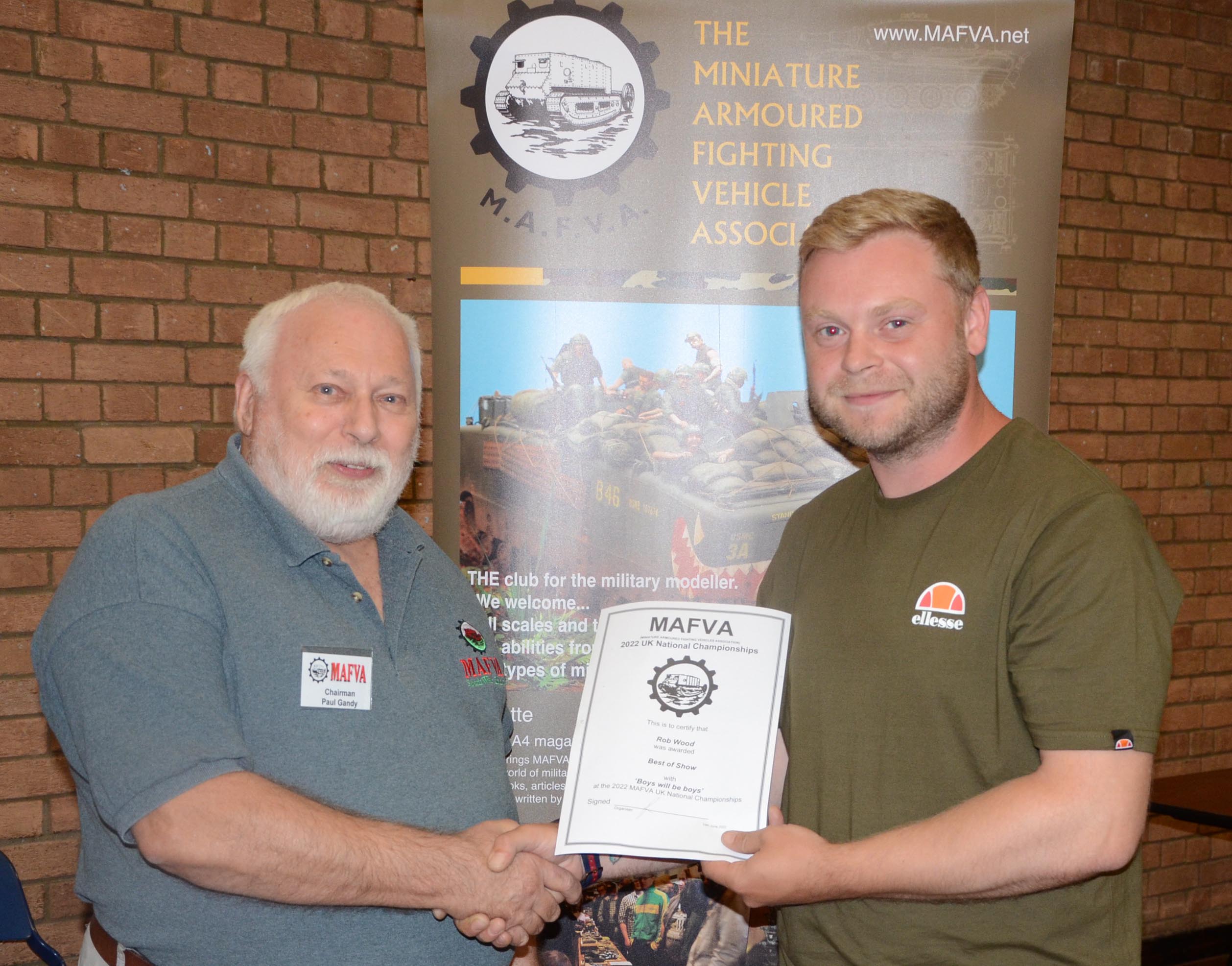 Charman Paul congratulates Rob Wood, the 2022 Best of Show winner. As his prize Rob had the choice of kits and chose the Amusing Hobby 30.5mm Morser. 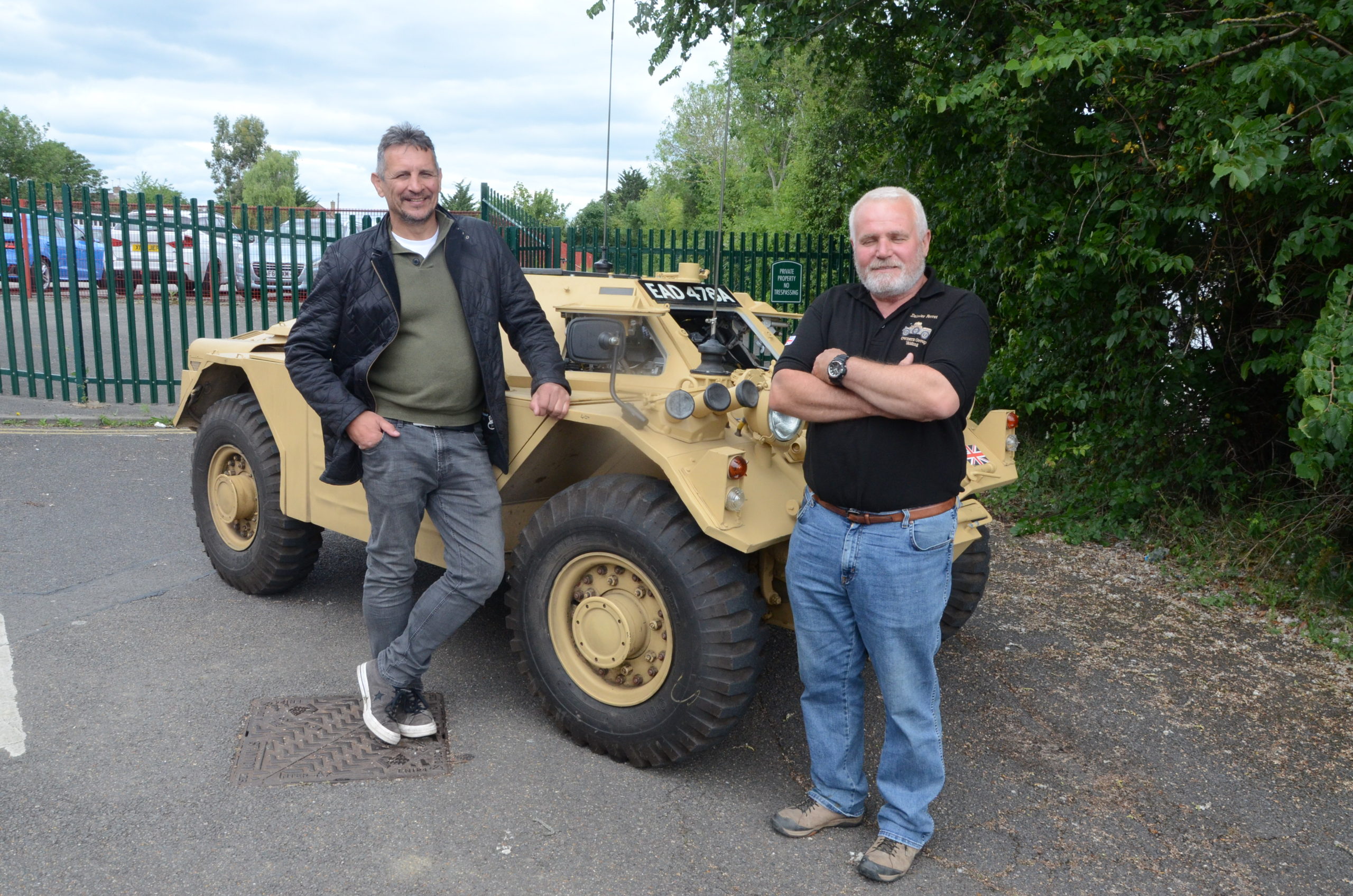 For the first time at Burgess Hall we actually had a 1:1 Armoured Fighting Vehicle on show!