Sunday, July 3 Become a MAFVA member for as little as £16! Click Membership in menu below
You are at:Home»Reviews»Review of Scrapyard Armour

AFV Modeller Publications are well known for their monthly high quality magazine that show cases the work of some of the best AFV model makers in the world.  This new bo 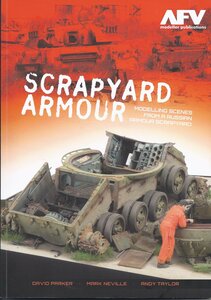 ok published by them follows a very similar format to the magazine.  The book is divided into four chapters: “Trisected T-62”; “Scrapyard”; “Green around the Gills” (An intriguing reference to a swipe of green emulsion paint that obscures the vehicle numbers on the turret) and “Georgian T-55”.  The “Scrapyard” chapter is 40 pages of full colour photographs from Sergey Buyanov of a tank scrapyard in Ussuriysk.  The other three chapters portray Russian armour in various dilapidated states awaiting the scrap merchant’s cutting torch. This is an excellent book that portrays armour in a very different light with all of the models built and finished to an incredibly high standard.

The chapter that covers the “Trisected T62” by David Parker is particularly worthy of note.  It depicts a T62 chassis that has already had the attention of the cutting torch – hence the “Trisected” reference – and has a wealth of interior detail.  Based on the Trumpeter T62, the author uses parts of the Verlinden Productions T62 interior set as well as components from the CMK T55 interior set but the modeller has added an enormous amount of extra detailing to both these sets.  The kit parts have been augmented but it is the interior detailing that is stunning.  The first picture tells the whole story; the model has been added into a real scrapyard scene by use of photo editing software and whilst this is now common practice, it is almost impossible to work out where the model ends and the real photograph begins.  The chapter has around eight large photographs per page that shows the model being built up and the tiny scratch built parts are stunning.  The sign of a good model can be summed up by “the more you look the more you see.”  There is much to see here.

The “Green around the Gills” from Mark Neville is similarly top class. With this model the author uses a Trumpeter kit to depict a T62 BDD Model 1984 awaiting disposal.  The emphasis here is on depicting the rusty surface of the abandoned tank and the model looks suitably forlorn.  Similarly inspiring is “Georgian T55” by Andy Taylor.  This depicts an AFV that has zip boxes, sights and fuel cells all removed, and has clearly been abandoned and exposed to the elements for some time – extreme weathering!  Based on the Tamiya kit, with detailing parts from CMK, a lot of extra parts have been replaced with plastic card and abundant extra detail has been added from scratch built components.  All of the models are realistically set in dioramas.

This book is a real “must have” for any model maker interested in modern era Russian armour.  At its core is a fascinating set of photographs of a real scrapyard and the model making articles view the subject of Russian armour from an unusual angle.  Well worth the cover price for the scrapyard pictures alone and many model makers will be inspired by the techniques used to produce such high class replicas.  Highly recommended and thanks to Casemate for the review book.

A very different take on model-making, this excellent book uses the work of three different modellers to illustrate the techniques of portraying tanks in scrapyards. Each modeller uses a different approach with one tank (these are all Soviet era tanks in Eastern Europe) already being dismembered. The models are beautifully set in dioramas which help tell the ‘story’ of the model.

The centre of the book gives 40 pages of photos taken in a scrapyard to show the flavour of the subject material.

The detail in these models is mind-boggling and deserves study to appreciate the amount of work involved. Certainly to be recommended to both enthusiasts of post-war Soviet armour and modellers seeking tips on modelling techniques.