Wednesday, March 3 Become a MAFVA member for as little as £16! Click Membership in menu below
You are at:Home»Reviews»Review: Panzerwrecks 22: Desert 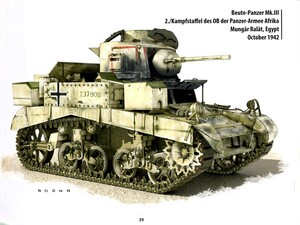 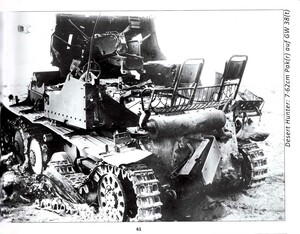 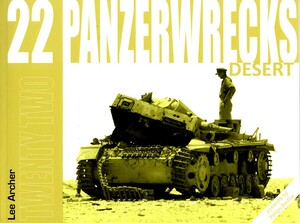 The latest volume from the Panzerwrecks series is a volume dedicated to the Western Desert, or the North African theatre.  This particular book has much to recommend it, with some simply stunning photos that are, I believe, largely unpublished in any previous book.  There are 6 colour renderings of photos in the book, showing the artist’s interpretation of the photo and realistic colour schemes.

The format of the softback book follows the pattern of the previous releases, with 96 A4 pages in landscape layout, which gives maximum space for large photos and very useful captions.  As always, the photos are as crisp as they can get, and the 156 photos have been carefully chosen to give a lot of interesting detail in the shot.  The first 15 pages cover the Panzer III, with photos ranging from wrecks out in Libya to Tunisia, and include some particularly interesting photos of concrete armour applied to a turret, which I’ve never seen before.  The next ten pages provide some excellent pictures of 8-rad armoured cars, wrecked or abandoned, with some really useful illustration of weathering.  Some of these cars look really beat up!  Then we have 18 pages of captured (Beute) allied vehicles, including M3 Honey, Crusader, Valentine and M3 halftrack.  These aren’t just wrecks of allied vehicles, as all of the illustrated vehicles have German markings, and were being used by the Axis before being recaptured.

The next 16 pages have superb shots of Panzer IV ranging from broken down wrecks to some complete and catastrophic disintegration, including the famous example with the upper hull up on end.  Then we have 17 pages of Marder III mounting the Russian 7.62cm. gun.  There are some super details for anyone with the Tamiya kit of this combination of a captured gun and the 38(t) chassis.  There is one page on the Famo, and then 6 pages on halftracks (mostly Sd.Kfz.251), and 6 more on the Lorraine with the 15cm. howitzer.  The last few pages have fantastic pictures of Pz.1, Pz.2, 222 armoured cars and M13/40 tanks.

I have ten other volumes from the Panzerwrecks series, and I’m going to say that this is the best, in my opinion.  The photos are chosen carefully, and organised by type.  The layout is great, and the captions give just the sort of details that a modeller would want to see.  For £17.99, in my opinion, this is very highly recommended.  Even if you don’t make models of Afrika Korps subjects, the general information will help add extra details to vehicles in any theatre.