Sunday, July 3 Become a MAFVA member for as little as £16! Click Membership in menu below
You are at:Home»Reviews»Publications»Review – T-34 vs StuG III, Finland 1944. Steven Zaloga 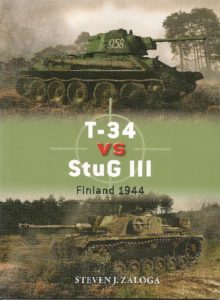 It was almost midsummer, and in the long twilight when the counterattacking Finnish Sturmi StuG III Assault Guns encountered and engaged Soviet T-34s in June, 1944.  Stalin had planned to crush Finnish resistance with an overwhelming force, and which had already breached Finnish defence lines north of Leningrad when the Finnish Puroma battlegroup was deployed to spearhead the counter response. This action around Kuuterselka village was the largest armoured engagement of the campaign and in which the Finnish Sturmi inflicted substantial losses on the mixed force of T-34-76s and -85s.  One interesting statistic presented was that 7.5cm KwK 40 of the StuG was comparable to that of the T-34-85, but many factors influence a successful hit: optics, ammunition, crew training and morale, command, control and communication structures, survivability of the AFV, and critically getting in the first shot. Tank vs tank engagements are uncommon and this is an interesting account of a lesser known action with some good photos of participant AFVs and crews.