Sunday, July 3 Become a MAFVA member for as little as £16! Click Membership in menu below
You are at:Home»News»Review – The Americans, From Normandy to the German Border by Brooke S. Blades 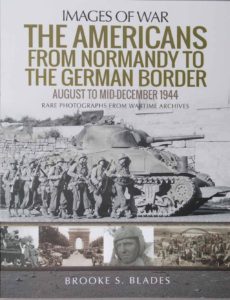 Title: The Americans, From Normandy to the German Border

This new book is the second of three titles in this series from author Brooke S. Blades. It follows the previous book, ‘Americans on D-Day and in Normandy’, and is due to be followed in future by a third book covering the Battle of the Ardennes onwards.

Spread across 8 chapters, this one takes the story from the start of the breakout through Avranches and the fighting of the Mortain counter offensive and on to the liberation of Paris. While there were significant and swift advances from then onwards, the extended lines of communication and stiffening German resistance led to the need for decisions of what to do next. So the book goes on to look at the US involvement in Operation Market Garden and then the advance to Germany, the capture of Aachen. This volume closes in the mud and wet conditions of fierce fighting in the Hurtgen Forest, within Germany itself.

Each chapter is started with a few pages of text which tells the story of each element and then a section of archive photographs to illustrate each stage. The bulk of the photographs I had not seen before and they will be of interest to historians interested in the NW Europe campaign, while modellers will find lots of detail of vehicles, uniforms and equipment, along with plenty of ideas for dioramas. I With images of so much destruction in both France and Germany in particular, civilians pushing their possessions along the road , POWs and casualties, it doesn’t hide the misery that goes along with any war. The archive images are well chosen and this is another good Images of War title, so the final part of the trilogy is one to look forward to.

Thanks to Pen and Sword for this review copy.