Sunday, July 3 Become a MAFVA member for as little as £16! Click Membership in menu below
You are at:Home»Reviews»Publications»Review: VALLEY OF THE SHADOW, The Siege of Dien Bien Phu. 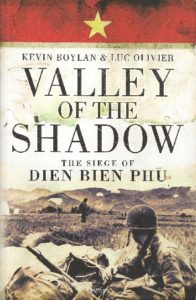 La cuvette des toilettes, toilet bowl, was the name given to Dien Bien Phu by the French defenders in the final days as the Vietnamese People’s Army closed in on the base.  Established as an aero-terrestres, an air-land base, Dien Bien Phu was a battle that the VPN had to win.  Ringed by fortified hill positions, these became bloodily contested battle grounds in repeated attack and counterattack. Preparatory VPN stockpiling of munitions and stores required gargantuan effort to construct supply roads, whilst the French expected air supplied overwhelming firepower to defeat a numerically superior foe.  After initial quick VPN success, the battle became a slow siege as the VPN adopted WW1 style trench and mining tactics to mitigate French firepower.  Denying use of the airstrip and restricting resupply and reinforcement by parachute drop Vietnamese artillery and AA batteries increased the stranglehold on the base.  The outcome was inevitable bringing to an end French colonialism in Indochina. This is an even handed highly detailed strategic and tactical narrative of this battle down to platoon level and individual tank engagements. Making use of recent Vietnamese sources, this analytical account questions many accepted (Western) histories, presenting new alternative versions and facts, and also providing insight to how battlefield commanders make decisions in changing situations and conflicting intelligence.  Thanks to Osprey for the review sample.                                                                                                                        John Ham