Tuesday, July 27 Become a MAFVA member for as little as £16! Click Membership in menu below
You are at:Home»Tankette»Tankette 55-6 out now! 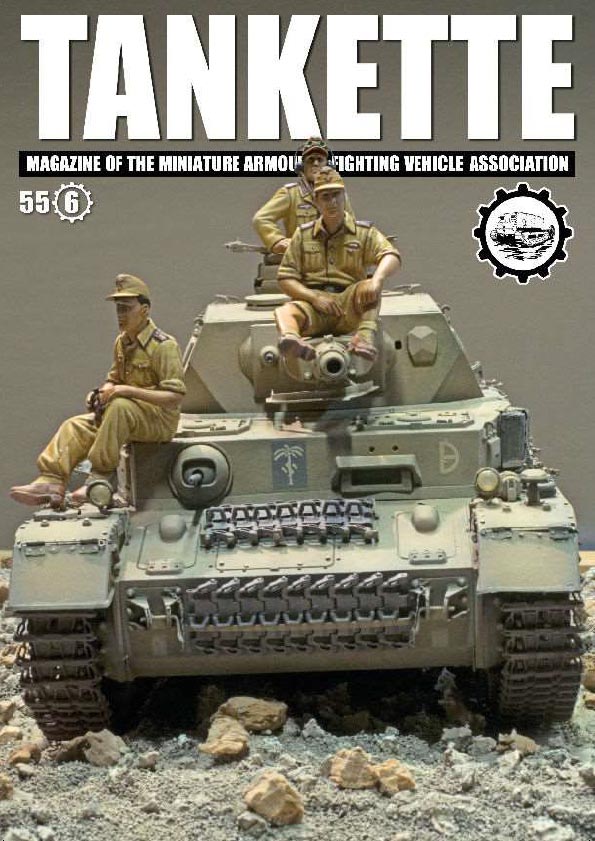 Not a MAFVA Member? Join here for as little as £16 per year.

The last issue of Tankette for 2020 is now out and filled with a wide variety of articles of interest to us tank geeks.
The cover has a large format photo of a model PzKpfw IV in Afrika Korps markings from the files of John Woolford. Page two has the regular feature of members’ models which includes several different scales and super detailed kits through to scratch built 1/60th scale masterpieces. This is a perfect illustration of the inclusivity of MAFVA, a wide difference from our Association’s formative years when 1/76th was virtually the only known scale.
Page three contains the contact details for the association officers, an index of articles and the editorial from Robin.
The first article comes from the pen (keyboard) of Dick Harley and is titled ‘Reality Check: The Churchill 3inch 20cwt Gun Carrier’. Here we look at the life of the real vehicles, and then compares it with the 1/35th scale AFV Club kit, with some very interesting snippets of information. The article also features photos of the kits and the real thing, a stowage diagram and a comparison chart of ammunition performance.
The next article is titled the Lightweight Close Support Weapon, by Simon Dunstan, who leads us through the complicated story of British AFV development post war. The FV300 series and it’s SP derivatives, the SP variants on the Centurion hull, the introduction of the 105mm Pack Howitzer, M44 105mm SP (I did not know it was called the ‘Cardinal’ in British service!), are all discussed. Amongst the next generation of AFVs was a requirement for the ‘Armoured Vehicle Reconnaissance’ or AVR. This did not come to fruition, and neither did the ‘Ground Air Scout Car’, which appears to be a refugee from a Dan Dare comic.
Another development in the early 1960’s was the ‘Lightweight Close Support Weapon’ or LCSW, to fulfil a need for a powerful but airportable self-propelled gun. Peter Davenport supplied schematics and scale drawings of these designs to give form to the descriptions. More of this fascinating period will be covered in the next Tankette.
On the Market Place is the next regular article where the editor, Robin Buckland introduces the latest announcements in the world of kits. This time we see a variety of scales, nationalities and eras, with something of interest for everyone to add to their stash.
We then have another regular spot, The Case for Books which reviews six very different recent publications, giving readers a head up on what is available.
Following notices about the MAFVA website and Facebook page is a short piece with photograph about an obscure Churchill variant by David Fletcher. It is that obscure that David invites readers to contribute information.
This year has been particularly bad for modellers as the pandemic has seen almost all model shows cancelled, and most of us making do with ‘virtual meetings and competitions. It is therefore most pleasing to see that the new MAFVA branch in Gibraltar managed to hold their own show in October, despite the need to follow public health advice. A report appears in this Tankette from Roy Francis, with a list of results.
The inside back cover and back cover once again have a contribution from our friend Berndt Kubiak at the Swiss Tank Museum, this time with some excellent colour photos of their M109A2 SP gun.
Another excellent issue of the magazine, put together by Robin with contributions from the membership. Paul Middleton 10/12/2020