Sunday, October 2 Become a MAFVA member for as little as £16! Click Membership in menu below
You are at:Home»Tankette»Tankette 56/2 out now! 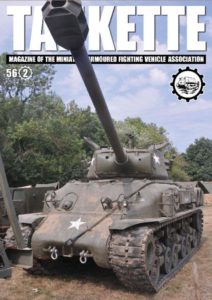 This issue of the MAFVA magazine starts with a splendid cover image of a Sherman M51, the Israeli up-gunned version of the M4A3E8, albeit painted as a wartime U.S. Army vehicle, seen at Beltring.
Page two has its regular member’s model spot with a variety of models showcased. An ideal way to see what is being built, and the skill of the model-maker. Interesting to note the comments on the buildability of some kits.
Page three has the usual contact information, notices and the editorial where Robin describes the forthcoming ‘Virtual’ Nationals for 2021, a necessary alternative to our annual gathering in view of Covid restrictions.
A new series from Dick Harley starts with a ‘Rotunda Round-up’. This article uses photographs taken by Dick when the Royal Artillery Collection was based in an ancient building (The Rotunda) at Woolwich in London. The collection later moved to the Firepower exhibition and currently sits in storage awaiting new premises at Larkhill in Wiltshire. Part one looks at the history of the 18/25pdr Field Carriage, the details, and also how to model the subject.
On page seven, Peter Davenport shows us how to use the venerable Airfix kit of the Scammell Tank Transporter, and includes drawings of the Scammell 20ton trailer (early and late versions) in 1/76th scale.
Out in the Marketplace is the regular round-up of recent offerings from manufacturers, and Robin reports on kits from Italeri, Revell, Vespid, Bolt Action and Hobby Boss.
David Fletcher then shows us another obscure military vehicle dating from 1909 called the Crompton-Bentley Tractor, a steam-driven vehicle that disappeared from history.
The Case for Books brings us short reviews of recent additions to the bookshops including the Haynes Manual on the Scorpion, an Osprey on the Balkans 1940-41, Army Group South, Humvee from the Land craft series