Monday, January 24 Become a MAFVA member for as little as £16! Click Membership in menu below
You are at:Home»Tankette»Tankette 56-6 Available Now (for paid up subscribers) 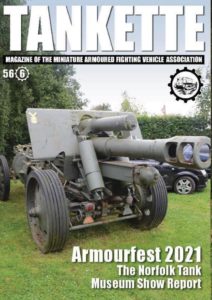 Review Tankette VOL 56/6.
The last issue of Tankette for 2021 starts off with a good cover shot of the Czech (Skoda) 152mm vz 18/47 seen at the Armourfest show in Norfolk this year. More on the show later.
Page 2 gives us Members Models which includes an assorted selection in a variety of scales and subjects built by MAFVA members from both the UK and world-wide.
Page 3 lists contact information for Association officers, a list of contents and the editorial from Robin Buckland. Robin discusses the challenges of modelling during lockdown, the use of zoom meetings and encourages members to contribute to the magazine. MAFVA is an association of friends, not just a subscription to a magazine, and the idea is to exchange information and ideas.
The first article is a joint effort by Dick Harley and Stuart Harrison in the form of a ‘Reality Check’ on the Scammell 30 ton Tank Transporters. This is part one dealing with the design and development. Included with the history is a table of the different production models with their differences, drawings of the details of each type, and photos of models.
Sadly the next item is an obituary of one of the founders of MAFVA, and a leading light in the home-casting of resin models, Eric Clark. He was a ‘larger than life’ character with many interests and Stef Zadziuk gives an excellent review of his life. The older members will remember the ‘EC Models range in the blue sticky resin, packed in cotton wool. How many of these survive?
Robin brings us a photo report of Armourfest 2021, which was held at the Norfolk Tank Museum
http://norfolktankmuseum.co.uk/ in August. For many of us it was the first ‘escape’ doing what we enjoy alongside fellow modellers. It was a great one day event (hopefully back to full two-day format in 2022, check the MAFVA Diary page https://www.mafva.org/diary/?v=79cba1185463 ) with plenty of running and static tracked as well as wheeled AFVs and soft-skins.
From Gibraltar we then have a review/build from Roy Francis Perez of the War Slug 1/35th ‘British Armoured Car’, which builds into a Rolls Royce of the First World War. The photos show the detail in the kit, plus the additions Roy has added.
Out in the Marketplace showcases the latest kit releases, and Robin shows us new Dragon kits in 1/72nd, new Vespid releases and also a couple in 1/56th scale from Rubicon. Robin also discusses paints from MiG and Lifecolor, plus decals from Star decal.
The ‘Case for Books’ looks at some recent literary releases, as reviewed by members. As stated earlier, Robin welcomes input from all members. This time they are mostly Osprey publications, with one from Pen and Sword. All look like good reads.
Regular contributor David Fletcher gives us yet another ‘lost’ military vehicle from the archives. The Daimler/Renard Road train was designed by a French officer and built by Darracq in 1903. There was a lot of international interest, and the remains of one has been found in Australia and restored to running condition. That makes it even older than Mephisto, the A7V preserved in Queensland.
We then have a neat modelling article by Andy Lang of the Bofors 37mm A/T Morris CS/8 Portee.
A complicated build with plenty of information and photos, plus an important guide to source information. Being the back cover and inner pages the Caunter scheme shows up well in these photos.
Another excellent issue from Robin.