Wednesday, May 18 Become a MAFVA member for as little as £16! Click Membership in menu below
You are at:Home»Tankette»Tankette 57-1 Now Available (For paid up MAFVA Members) 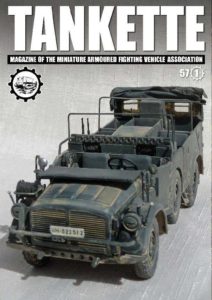 Review: Tankette 57/1
The first issue of Tankette has arrived, and we have come a long way from the original issues produced 57 years ago on a school Roneo printer…..
The cover photo is an excellent view of Mike Hector’s model of the German Kfz 23 fitted for line-laying and switchboard operation. This ties in with Mike’s article further inside the magazine.

Inside the front cover Robin has included photos of six models sent in by members, an interesting mix of scales, periods and types. Simply titled ‘Members Models’, this page hopefully inspires our fellow members to have a go with the kits that are out there.

Page three, as always, carries the contact addresses for the Association officers, a list of contents, and the editorial from Robin Buckland.

Dick Harley then continues his series of the ‘Rotunda Round-up’ where he uses his collection of photos taken at the Woolwich Rotunda to describe various artillery equipment. In this, part five, the 25-pounder on the Mark Three carriage is described in detail. This was a development to reduce the weight and width of the excellent weapon to help those using them in the jungles of the Far East. The hinged trail helped increase the elevation and thus range of the gun, and reducing the width of the axles made it possible to use a Jeep as a tractor.

Next we have a short modelling article by yours truly describing and modelling the Grant Command tank used by the GOC of 6th South African Division in Italy. An interesting kit bash, mostly supported by my spares box.
Mike Hector brings us an excellent treatise on two WW2 German Nachrichtung (Signals) vehicles, the Kfz2/1 and Kfz 23. After describing the real vehicle Mike shows us how to build detailed replicas in 1/35th scale with photos and templates, and using available kits from ICM and Tamiya kits. Mike has given us the ‘how to’ should you wish to build these models, ideal for those wishing to progress beyond the OOTB (Out Of The Box) build. Incidentally Mike, the poles used for laying and recovering telephone wires are called ‘Shepherds Crooks’.
On page 13 we have some Association business with a notice requesting volunteers to help with the running of the club. MAFVA is an association of friends, and is run on a non-profit basis with volunteers in order to keep the costs down. This is what accounts for us maintaining a strong presence within the hobby for over fifty-seven years.

Robin then gives us his regular piece on recent kit releases ‘Out in the Market Place’, where we can catch up with the apparent continuous flow of new material for us to stick together. Perhaps the most eagerly awaited is the British Daimler Armoured car from Gecko Models in 1/35th scale. Funny how we have had umpteen kits of paper panzers and only now we get the standard British WW2 armoured car that saw service for many years.
We also have ‘The case for books’ with reviews of six new releases.

David Fletcher presents us with a photograph and information from the archives of the obscure Wilson’s Gun Tractor. This vehicle was designed by an eminent engineer and built in 1906, but no interest was shown.

Finally we have another set of colour photos from Ralph Zwilling of the M1279 Oshkosh L-ATV Utility. This will be the replacement for the current Hummer family.
Another great mix of articles in this issue.
Paul Middleton 1528