Sunday, July 3 Become a MAFVA member for as little as £16! Click Membership in menu below
You are at:Home»Reviews»Publications»Tankette 57/3 available for paid-up members 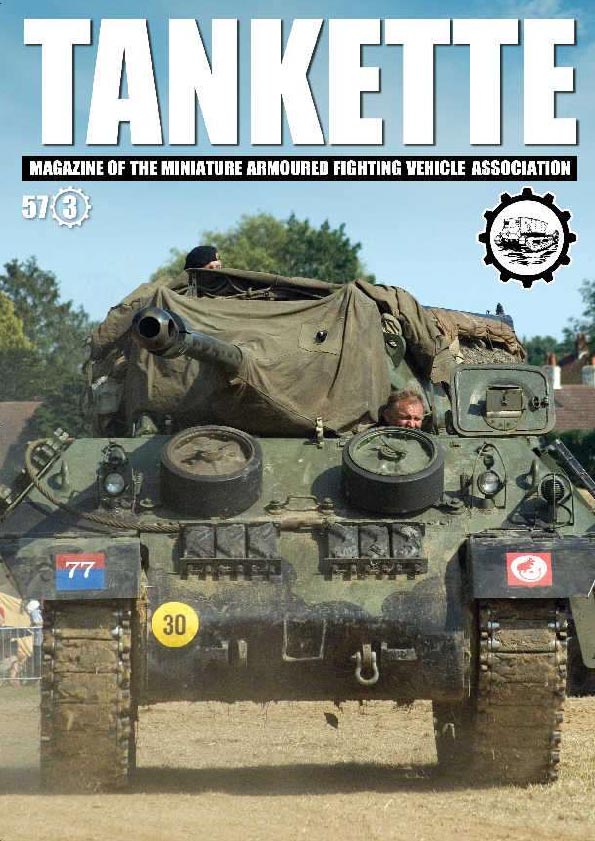 Review: TANKETTE Volume 57/3
This issue of Tankette starts with an eye-catching cover photo of an M10 17pdr (AKA Achilles), taken by our regular contributor, John Woolford.
On page two are featured colour photos of models sent in by members, which include a variety of scales, eras and nationalities. Certainly a source of inspiration for ideas.
Turning to page three we have the usual contact addresses, list of contents and the editorial from Robin Buckland, where he discusses current and future items.
We then have part two of an interesting article by Dick Harley and Stuart Harrison, looking at the possibilities for modelling the Scammell 30 ton Tank Transporters. The mass of information, supported by plenty of photographs is an ideal source for those wishing to complete a model. Part three will cover the 1/35th scale Thunder Models kit.
On page seven we are reminded of the various features of the MAFVA website, followed by a plug for the MAFVA Nationals which take place on the 19th June. Those who can attend will have the opportunity to discuss Tankette with Robin, perhaps even offer an article in contribution .
Mike Starmer then gives us his in-depth treatise on the Churchill tanks of ‘Kingforce’, the debut of the type on the battlefield in North Africa, 1942. The amount of information is staggering with each of the six tanks described, along with colour profiles, and a combat history of each through their baptism of fire.
The ‘Case for Books’ follows, looking at six recent publications with a brief description.
We then have ‘Out on the Marketplace’ where Robin looks at a variety of recent kit releases across the scales and genres.
David Fletcher delivers his regular contribution, this time looking at the Invicta Roller, a very early attempt at mechanical mine clearance, mounted on a MK IV Female tank in 1918. As usual with his articles, very little Is known, and any further information would be most welcome.
The final article for this issue is part one of a photo-essay from former Chairman John Ham of the Russian UMMC/UKMG Museum at Ekaterinburg (formerly Sverdlovsk). This was the site of one of the Soviet tank factories that Stalin had re-located following the German invasion of Operation Barbarossa. An amazing collection of military vehicles are on display, both indoors and outside, which John has captured in the images shown. Of note is the number of vintage re-builds (or scratchbuilds?) in order to present the complete history of Russian tank development. In this issue, the exhibited T-35 comes under scrutiny.
Another fascinating read for the enthusiast and armchair historian. Well done Robin!
Paul Middleton 04/06/2022