Sunday, October 2 Become a MAFVA member for as little as £16! Click Membership in menu below
You are at:Home»Reviews»Publications»Tankette 57/4 now available for members 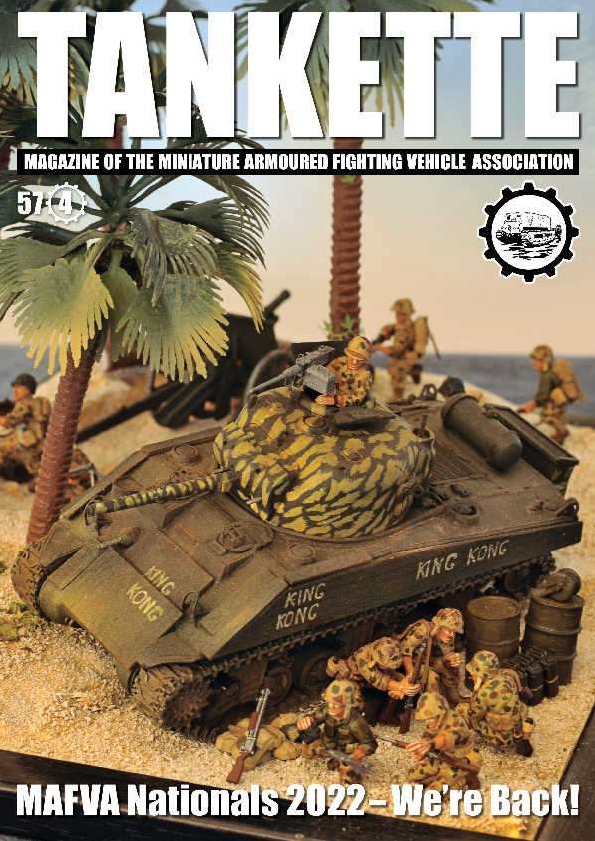 REVIEW:
TANKETTE 57/4
Halfway through the year already, and we now have Tankette issue 57/4 available.
Robin has collated a variety of material for our perusal, from across the various eras and types of military vehicles.
The colour cover photo taken by John Woodford at the 2022 MAFVA Nationals this year is of a 1/48th scale diorama of a Sherman landed on an island in the Pacific campaign.

Page two has a series of photos of member’s models in various scales. This is an opportunity to see what other model-makers are getting up to, and hopefully derive some inspiration. As well as a couple of well-known ‘names’, it is good to see the work of new guys.
The editorial appears on page three, and reminds us that Tankette is the journal of the Association, and all members can contribute to the content with articles, plans and photos. This is also where the contact addresses are, and a list of the articles.

Dick Harley continues his Rotunda Round-up with part seven, The 12 pounder, 12 cwt quick-firing gun. This weapon served for over sixties years, including both world wars, and on a variety of land-based and ship-board mountings. As well as photos taken at the Rotunda in London, Dick also includes his 1/76th scale drawing of this weapon mounted on an Albion truck, part of the emergency defence production of 1940. This with the text, and references of photos held by the Imperial War Museum and the bibliography, gives you all you need to build a model.

Mark Hazzard provides the next article, an in-depth review of the recent Takom 1/35th kit of the M114A1E1. Quite a few useful tips if you want to build this AFV as a model.

We then get a report from Robin on the 2022 MAFVA Nationals, complete with a selection of photos, which amply gives the reader a taste of our main event of the year. This year we were celebrating the return of the show after two years of Covid, and the icing on the cake was a visiting Ferret armoured car.
NB: Next years’ show is Sunday 18th June; put it in your diary.

Robin also provides the next item, ‘In the Market Place’ which covers a selection of new kit releases.
Weird that money is tight for all of us, but the flow of new kits is non-stop. This report has a wide selection of kits in several scales and many subjects.

Page 14 has a short piece with a photograph of the Fowler Magdeburg Tractor from David Fletcher.
This obscure gun tractor of 1905 is an example of the pioneering designs built before WW1.
The next article is on building a 1/35th scale model of an SdKfz 222 operated by the RAF in the Western Desert. The model used is the Tamiya kit.

The ‘Case for books’ brings us six book reviews on a variety of topics, and is a good insight as to their contents, always necessary if shopping on line.

The last article for this issue is from ‘Normandybunkers.com’ and comes with two pages of colour photos showing Shermans that have been used as targets, and will a bit more than a rub down with T-Cut…. Perhaps inspiration for a diorama?

Another excellent issue, Thank you Robin, and all the authors.
Paul Middleton 1528