Tuesday, July 27 Become a MAFVA member for as little as £16! Click Membership in menu below
You are at:Home»Tankette»Tankette Issue 53-3 Available Now! 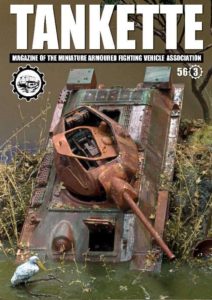 Issue three of 2021 is now out and available to paid up MAFVA members either as hard copy or as an electronic issue. See information on subscriptions on the membership page.
The cover is an excellent colour photo of a T-34 diorama that is full of detail making it very realistic.
Photos of members’ models are in their regular spot on page two, with a good mix of subjects and scales. These include a rail gun, two Matilda’s, and an M26 recovery vehicle.
Page three is the ‘admin’ page and carries the contact information, disclaimers and the editorial from Editor Robin.
The first article is part two of the ‘Rotunda Round-up’ from Dick Harley, concentrating on the 6 inch 30cwt BL Siege Howitzer. This antiquated looking gun first saw action in the Boer War, and Dick gives us the development and service history of the type to support his archive photos, and suggests the sourcing for a kit.
Canadian member Ed Storey then provides a photo essay of a 2015 display of Canadian Army vehicles in Ottawa. A variety of types are show which would warrant further research if they take the readers interest. Ed describes each type with a bit of history.
Editor Robin has been in contact with a member of the team currently restoring an LVT-4 (Buffalo) amphibian that was recently recovered from the fens of Cambridgeshire. Several photos show a relatively complete vehicle awaiting restoration once funding is secured. Quite a few of these and also Neptune’s were used to plug gaps in the flood defences during the terrible floods of 1947.
Supplier Insight makes a welcome return, this time looking at Panzer-shop.nl who specialise in 3D printed models, mostly in ‘N’ gauge (1/160th scale). However, the wizardry of the technology allows tweaking to produce the models in other scales on demand. Kevin Boogard, the owner tells us his main audience is model railway enthusiasts building layouts from the Cold War period, but he is building up a lot of interest from wargamers.
Andy Lang describes his excellent work in converting a 1/72nd S-Model PzKpfw 1 into the ‘Bison’ 150mm SP gun. This entailed support from several sources including a bespoke photo-etch set for the ultra-thin armoured superstructure mastered by Dan Taylor, who now includes it in his range.
Out in the Marketplace gives us a selection of recent kit releases and also some interesting decal sets from Star Decals.
David Fletcher brings us another rarity from the archives with a photo and potted description of the Carmont Motor Horse from 1903. David provides what little information there is (always eager from any response!), and any prospective model-maker would need to use a lot of educated guesswork.
Another regular feature is ‘A Case for Books’ which shows us several newly released titles.
We see a return for Stephen ‘Cookie’ Sewell, one of our U.S. members with another in depth review, this time of the Amusing Hobby kit of the Soviet T-72 M1 tank with interior. The article is a real education (for me at least) as he relates the kit offering to the real-life vehicle, complete with a history of development of the various sub-types. Interesting to read how the Soviets tailored the export models to different client states. Very useful advice if you are interested in Warpac armour.
It was sad to report on the passing of yet another MAFVA stalwart, Mike Whitty who had been an active member of the Cambridge MAFVA branch from the 1970’s, and a fundamental participant in organising the MAFVA Nationals at Duxford, an event he always enjoyed. Losing Mike also reinforces the comment in the editorial from Robin that we need new faces to step up and help with the administration work of MAFVA.
The last article is from prolific author Ralph Zwilling with colour photos of the German Spahpanzer Fennek 1A3 recce vehicle. Ralph provides a bit of information and indicates that kits are available in both 1/35th (Trumpeter) and 1/72nd (Revell). For those interested in the Fennek, Ralph has also authored a book on it in the Tankograd series.
Well done Robin, another excellent selection of articles.
Paul Middleton (1528) 30/05/2021