Sunday, October 2 Become a MAFVA member for as little as £16! Click Membership in menu below
You are at:Home»Reviews»The Liberation of Europe 1944 – 1945 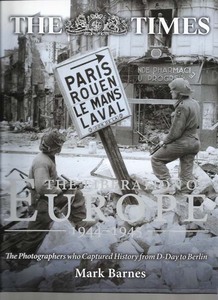 At slightly under A4 in area, this most excellent book is testament to the photographic art with over 400 beautifully produced images taken during 1944 -1945. The author, Mark Barnes, is to be congratulated for presenting to us so many iconic images in one publication.  The quality of the images is a result of careful selection, but also due to the archive of glass negatives in the Times library.
The book starts with an introduction to methods of filing the archives, the photographers, and a neat history of the press hierarchy in Britain. It then launches into the meat of the photos, covering the Normandy landings and following each stage of the liberation of Europe. Amongst so many wonderful photos there are many that warrant close scrutiny as details just pop out of the page.
Such details as are sought by us vehicle anoraks include a vehicle park filled with the equipment of the ‘Golden Arrow’ signals unit, yet another rare photo of a Crusader AA Mk1 at Asnelles where you can see some of the markings, a Churchill Mk VII called ‘Babbler’ from ‘B’ Sqn, 107th Regt. RAC, the crew of a Lloyd Carrier from the Monmouthshire Regt breaking into Compo biscuit tins, GMC AFKWX-353 trucks in Cherbourg, Derek van den Bogaerde (AKA Dirk Bogarde) Queen’s regiment at work as a photo interpreter, the Humber LRC of Major General ‘Bobby’ Ross, GOC of 53rd (Welsh) Division, showing a complete set of markings. Some photos, such as The Times WN6078, we have seen before, but in this print, such is the clarity of the shot, we are able to see the other Hybrid Shermans behind the main subject.  One new photo (to me) is of ‘Cuckoo’ the captured Panther operated by 4th Bn. Coldstream Guards, although it is obviously from the same batchas better known images. Another very interesting photo shows Churchill AVRE’s (including one called ‘Roderick’,  Crocodiles, Shermans (including an ARV with tilt set up) lined up awaiting a ferry to take them across the Rhine.  However, of prime interest is a Sherman BARV in the foreground that has had its superstructure removed, presumably as it would not be required for any wading, and to make operating a lot easier. A captured SdKfz 251 Ausf. D is shown sharing a ferry with an Austin K5 ‘Screamer’. On the same page is a large and very clear print of Stuart M5s of Recce troop, 3rd Bn., Scots Guards. Lots of details for the model-maker here.
Altogether an excellent book well worth the asking price.             Paul Middleton 25/11/2016