Saturday, February 27 Become a MAFVA member for as little as £16! Click Membership in menu below
You are at:Home»Reviews»Publications»The President’s Reading Room – Special offers for the bookshelf

Paul, our president, has been spending some time over lockdown studying some books that are currently on special offer and here are his thoughts on them.. 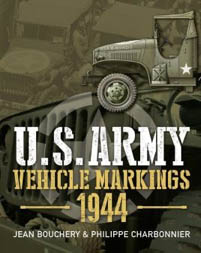 Military vehicle enthusiasts generally have a vague idea of the significance of the jumble of letter, numbers and symbols that adorn the U.S. Army vehicles of WW2. This book endeavours to unscramble the codes, illustrate their use, and where they were applied on the various vehicles.

Chapter 1 starts with a look at production figures, the Lend-Lease deliveries and shows the major types of U.S. vehicles with photographs and data. Chapter 2 describes the Communication Zone (Com Z), the ‘Red Ball Express’ with a map of its routes, with an organigram of a Quartermaster Truck Company.

With chapter 3 we are given the organisation of the U.S. Army with a chart of the vehicles issued to each sub-unit of an Infantry Division, more organigrams with examples of how the bumper codes work and a chart showing which sub-units were in which of the Infantry divisions. The same is then done for the Armoured and Airborne divisions, and non-divisional units such as Mechanised Cavalry Groups, Tank Battalions and Tank Destroyer Battalions. This is followed by other non-divisional support units, including the Military police.

Chapter 4 is titled ‘Common Markings’, covering an explanation of registration numbers complete with dimensions and locations, with plenty of examples and photos. This is followed by a section on national identification markings, again with dimensions and typical locations. Bridge classification plates, warning signs, speed limits, Red Cross markings, Clubmobiles, and much, much more are all covered. Chapter 5 looks at the unit markings, again with sizes, styles and locations with multiple examples. The final chapter, 6, illustrates camouflage patterns used by the U.S. Army.

This book packs a vast amount of information which is well presented and illustrated with on every page with photos and colour drawings. Many years ago we had the Almark book (which I still refer to), then several other books on U.S. markings, but this book supersedes the lot. Unfortunately, the translation from the original French text is not flawless, for instance, the term D.C.A. is short for ‘Defense Contre Aerien’, should have been translated as A.A. (Anti-Aircraft).  I was impressed to find so many ‘new to me’ photos, including a vehicle from my late Uncle’s unit. 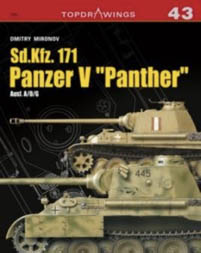 With only half a page on the history of the Panther, this book is not for the general reader. The main content of the book is the drawings of the Ausf. A, D & G models in 1/35th, 1/48th and 1/72nd scale. Also included are separate folded inserts with plans of the three models in 1/16th scale. The centrefold and back cover have ten side view colour schemes of various Panthers, including two ‘beute’ tanks operated by Polish forces in Warsaw (During the uprising) and Berlin. Most enthusiasts will know that the chronological order should read Ausf. D, A, G, but this is nit-picking. Not everyone has access or time to convert plans from one scale to another on a photocopier (and get the calculations right!) so the inclusion of all four scales can be a blessing. These drawings will be ideal in order to check out the numerous kits available of this popular tank. While there has been numerous books dealing with the history of the Panther, few contain drawings for modellers to work with.

An added bonus is the inclusion of 1/16th scale masks for the Balkenkreuz to assist airbrushing the markings. 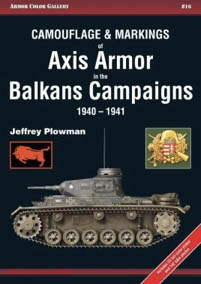 This excellent study of the various stages of war within the Balkans region is primarily a photo-study, and the text is not extensive, just enough to set the scene. The photos are excellent, and many of them ‘new to me’, while others are well-known, but with accurate descriptions. Jeffrey starts with an introduction to explain why Hitler felt the need to control the Balkans, and deny the area to the British. This section carries a mass of interesting photos of Hungarian armour such as the Toldi, Csaba and CV-33 Tankette. We then look at the war in Albania, where Italian forces were intent on taking over. Again, lots of photos, this time of Italian armour.

The next section tells us of the moves to involve Bulgaria and the text is supported by photos of German vehicles crossing the Danube over the large pontoon bridge. As before, some very interesting photos. One, of an SdKfz 251/3 shows the crew still wearing the Panzer troop’s protective beret. Early Stugs are seen, complete with visible markings, a bonus in view of recent kit releases in both large and small scales. We then see photos from the invasion of Yugoslavia which involved German, Italian and Hungarian forces. Again, these are large and clear, with visible markings and concise captions. A more obscure AFV in use by the Germans are captured French UE Tractors.

The invasion of Greece is then covered, and this is also well illustrated with a variety of German AFVs. An interesting SdKfz 251/6 appears in two photos with what may well be a covered telescopic mast mounted inside the working area and poking through the frame aerial. The last section is German armour on Crete, with just three photos including a dug in PzKpfw 38(t) turret.

The final section is a series of beautiful colour plates by Arkadiusz Wrobel, all to 1/35th scale, illustrating colour schemes and markings for several German AFVs, an Italian M13/40 & an Hungarian Toldi.

A splendid book for model-makers, as well as those with a general interest in the subject. Some may consider it to be a bit expensive, but the amount of material enclosed gives real value for money, with a heap of details to keep even the most serious anorak happy.

Other special offers from Casemate: 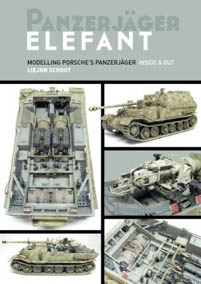 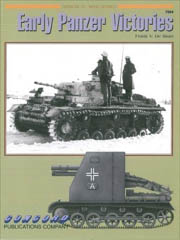 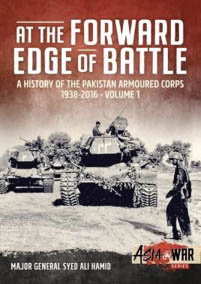 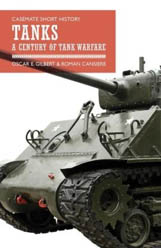