Tuesday, January 19 Become a MAFVA member for as little as £16! Click Membership in menu below
You are at:Home»News»VK 4501 (P) from Amusing Hobbies 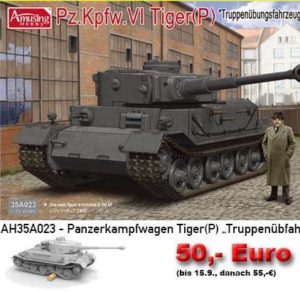 Here’s an unusual one for you. Amusing Hobbies are set to release a VK 4501 (P), also known as the Pz.Kpfw.VI Tiger (P). This isn’t the Tiger I we know. It’s the unsuccessful heavy tank prototype produced by Porsche in Germany in 1942. It was not selected for production. The Henschel design to the same specification was produced as the Tiger I. Most of the already produced chassis were instead rebuilt as Elefant tank destroyers. No details on the kit as yet although, as you can see,  the flyer indicates the price will be €50.