Sunday, July 3 Become a MAFVA member for as little as £16! Click Membership in menu below
You are at:Home»Reviews»Zaloga’s M1A2 Abrams Main Battle Tank 1993-2018 reviewed 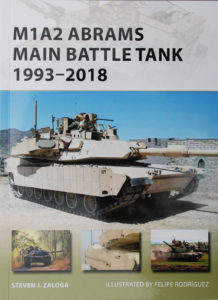 New Vanguard number 268 from Osprey is another from well known author Steve Zaloga and takes on the topic of the M1A2 Abrams MBT. There are quite a few books on the subject of the Abrams but this provides coverage of the most recent updates.

The Abrams was originally designed in the Cold War, when it was expected to combat Warsaw Pact AFVs in Central Europe in particular, where Soviet tank designs would have been the opposition. After the Gulf War, when it first proved itself in combat, it went on to fight in Operation Iraqi Freedom (OIF) and it needed to be adapted to cope with a different set of threats compared to the original design. By this time it was armed with the 120mm main gun (the first M1’s had a 105mm weapon). While the gun has remained the same we do hear about the new ammunition rounds that have been developed for it. Many of the other updates have been internal, with updated computers, sighting etc. Externally there have been the additions of external power units to provide power without running the main engine, and in turn this has led to the addition of a second turret bin at the back of the turret.

Other additions have been passive and active defence systems, protection against missile attack, and for the combat in the close urban environment, the development of two versions of additional armour, the TUSK (Tank Urban Survival Kit) I and II and addition of armoured shields for the two main turret hatches.

Another interesting section of the book has detail of the other AFVs that have been developed using the Abrams chassis. These include two styles of armoured bridgelayer, the Grizzly Breacher vehicle, the Assault Breacher vehicle and the Panther 2 Robotic Countermine Vehicle (ROCV). Some very different looks to the basic MBT. In addition, the Abrams has achieved a good deal of success in the Export market, with customers such as Australia, Egypt, Iraq, Kuwait, Morocco and Saudi Arabia. Plenty of interesting information, as we’d expect from a regular expert such as Steve, accompanied by plenty of good clear photo references and some equally excellent artwork from Filipe Rodriguez. Another useful addition to the New Vanguard series which I am sure modellers will like in particular.

​Thanks to Osprey Publishing for this review copy.